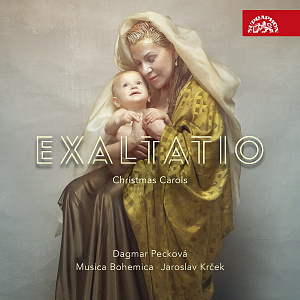 Following on from the highly acclaimed Christmas CD Nativitas, Dagmar Pecková, Jaroslav Krček and his Musica Bohemica have made another festive album, bearing the title Exaltatio. While in Colloquial Latin the word means “exaltation” and “elation”, in Christian theology it has a more profound connotation: “elevation”. Supraphon will release it 23 October 2020, on CD and in digital formats.

In the wake of Nativitas, the mezzo-soprano Dagmar Pecková decided to record another Christmas-themed album, featuring Czech and other European carols and folk songs hailing the Nativity. “Jaroslav Krček has been on the Czech music scene for almost six decades, which is quite astonishing. Most notably, Chorea Bohemica and Musica Bohemica, ensembles he heads, are closely linked with Christmas. Working with them has always been my dream! For me, Jaroslav Krček and Musica Bohemica epitomise Christmas, with their music sounding precisely how I imagine the festive season should sound. So I naturally wanted my Christmas albums to possess such a quality, to be full of the unique yuletide spirit,” Dagmar Pecková said in praise of her collaboration with the legendary musician, composer and conductor Jaroslav Krček and his renowned Musica Bohemica.

As in the case of their previous project, Pecková and Krček reached for Baroque hymnbooks, in which piety combines with a majestic sublime mood. The album also encompasses much more high-spirited and poetic folk carols. Jaroslav Krček has made stylistic arrangements, whose singular signature relates to Musica Bohemica. Moreover, the CD features several Baroque-inspired pieces he himself has composed. The magic of Christmas evidently continues to be celebrated by contemporary creators. Dagmar Pecková went on to describe the album’s tracks: “Besides wonderful Czech, Moravian and other European carols, the album contains pieces composed by Jaroslav Krček, Musica Bohemica’s artistic director and an inspired musician – the splendid Marian Songs in folk or Baroque spirit. I would also like to highlight the booklet foreword written by Professor Tomáš Halík, explaining the meaning of ‘exaltatio’ with regard to Christmas and Christianity. And, finally, I would like to introduce a promising young soloist, whose career has just started: the tenor Vincenc Ignác Novotný. His bright voice and sparkling performance add to the album’s colour spectrum a novel freshness.”

At Christmas, people feel much closer to one another than at any other time of the year, and it has been so for centuries. The special seasonal atmosphere is what the French, German, English and Polish songs on the album Exaltatio have in common. “Music has always helped people to dwell on the positive. In his foreword to the album, Professor Tomáš Halík writes: ‘By assuming the human lot the Son of God for ever connected deity with humanity – the humanity of every one of us. That is the ‘exaltatio’ of our humanity, its consummation. That is the deepest meaning of the mystery of Christmas: God expresses himself through humanity,” Dagmar Pecková pointed out.