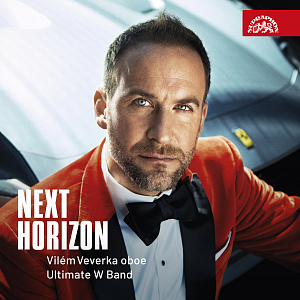 The name Vilém Veverka is familiar to everyone who has fallen for the enchanting tone of the oboe. His path to virtuosity commenced with accolades at international competitions, and continued with gaining experience with the Berliner Philharmoniker, performances with the chamber formations Ensemble Berlin Prag and PhilHarmonia Octet, and building up an extensive repertoire, ranging from Baroque to contemporary works, a number of which he himself has premiered. Yet Vilém’s horizon is much wider – his ambition is to present the oboe in a context different to that which we are accustomed. Following several „classical“ summits (critically acclaimed recordings of works by Telemann, Britten, Vivaldi, Zelenka and Bach), he has made another of his dreams come true. The result is the crossover album Next Horizon Veverka made with his Ultimate W Band which will be released by Supraphon on CD and in digital formats on 9 October 2020.

It would seem that the need to transcend borders is deeply encoded in Vilém Veverka’s DNA. And thus on the album Next Horizon, recorded with Ultimate W Band, you will find side by classical, film and pop music, and also compositions Martin Hybler wrote for Veverka. Everything has been thought through, every single detail refined. „Ennio Morricone is specifically lyrical, even melancholy. The oboe augments Morricone’s me­lodies, and his Romanza Quartiere and Gabriel’s Oboe simply had to feature on my new album. When it comes to Ástor Piazzolla, I have only got to know his works relatively recently, thanks to the accordionist Ladislav Horák. Piazzolla is currently a true global phenomenon – when audiences hear his music, they feel like dancing, getting up from their seats, his music pulsates, it is tender, shared joy,“ Vilém Veverka said, adding: „Martin Hybler and I have worked together for two decades, and of late our collaboration has been ever more intense. I presented to Martin a few musical notions, and he has succeeded in recasting them ingeniously into the two compositions that adorn the album. And it was Martin Hybler who came up with the idea of incorporating Miroslav Žbirka’s The Ballad of Field Birds. Martin previously instrumented some of Žbirka’s songs into symphonic form. He chose one of the songs, with the result being the highly emotional piece concluding the album.“

A concert presenting Next Horizon is scheduled to take place on 26 November 2020 at the Prague Crossroads (Church of St Anne). Within the evening, which will be filmed by Czech Television, the album will be launched. „I perceive Next Horizon as something representing my further development, a view of myself as a performer, as well as a view of how I make music. It reveals my desire to move forward, not to stagnate. Ultimate W Band and I have outlined the path that will take us to new horizons. One of them could be collaboration with Michal Pavlíček,“ Vilém Veverka points out.