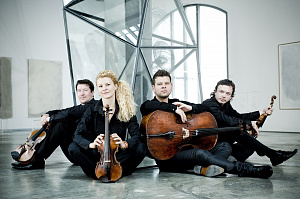 The globally renowned Pavel Haas Quartet are giving concerts again! Their first performance in the new season took place at the end of August in Merano, Italy. In September, the ensemble appeared as guests at the St Wenceslas Music Festival in Ostrava, as well as at the Burg Taggenbrunn, Austria. On 5 October, they will be performing at the Rudolfinum in Prague at an evening held within the Czech Chamber Music Society concert series. The programme includes the world premiere of the Slovak composer Ľubica Čekovská’s Octet for two string quartets, commissioned by the Pavel Haas Quartet, who will be joined by Italy’s Quartetto di Cremona. On 9 October, the PHQ will give a recitals at the Lednice-Valtice Music Festival and on 11 October at the Janáček Brno Festival. In late October and early November, the ensemble are scheduled to perform at the Elbphilharmonie in Hamburg, Wigmore Hall in London and Teatro della Pergola in Florence.