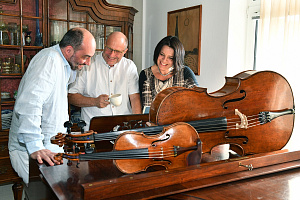 Glimpsing through the Smetana Trio’s discography, this appears to be your first Beethoven album. Is that indeed the case?
Jitka Čechová: Yes, it is. When I glance at our history and recordings, it is quite logical that we first focused on Czech music, then on global Romanticism and 20th century. And now we have embraced Classicism, which, although having often been taboo, is indisputably the core repertoire. Beethoven’s trios have been recorded by numerous ensembles worldwide, so the question arises as to the extent to which a new album can present novel performance.

Was the 250th anniversary of Beethoven’s birth the main impulse for the making of your double album?
Jan Páleníček: Absolutely. It was one of the major stimuli for us and the Supraphon label alike. Ludwig van Beethoven’s music is extremely challenging to perform. I personally perceive it as a bridge between Classicism and Romanticism, the style that his later opuses actually ushered in. It thus depends on the sensitivity of the performers to realise in which of Beethoven’s cre­ative periods they find themselves.

What factors made you choose the four piano trios that you have recorded?
Jitka Čechová: We based our selection on the periods in which they were written. They provided a splendid cross section through Beethoven’s oeuvre. The album contains Opus 1, dating from the Mozart period, as well as Opus 97 (the „Archduke Trio“), which is a grand Romantic symphonic piece.

I assume that the recording of the album was preceded by numerous concerts at which you performed the works. Are preparations for making CDs anyhow specific and do they differ from preparations for concerts?
Jan Páleníček: When you know that you are about to make an album featuring specific works, the preparations run throughout the respective season. When it comes to the recording itself, we strive to render the primal substance of the composer’s in­tention. The scores provide us with a number of signposts, yet it is upon us as to how we decide to interpret the music.

Taking about scores – how important is the selection of the music material?
Jan Talich: The question is difficult to answer in general. Every artist may answer differently. There are musicians who give preference to modern editions, while others rather reach for urtext sources and facsimiles. The editions are inconsistent, none of them reveal conclusively how Beethoven wanted the music to sound. In my opinion, it is good to procure the latest versions, as their editors seek to include everything in the scores. Yet I think you must ultimately approach it in your own way and pursue your own path.

As regards the performance aspect of the trios, does Beethoven afford equal scope to all three instruments?
Jitka Čechová: We know from history that this type of piano trio crystallised during the era of Classicism. In his early works, Beethoven still foregrounded the piano, and only later did the other two instruments become equal, which is clearly palpable on our double album.
Jan Páleníček: I would like to add that in the case of the cello you can see that the requirements grow with the increasing opus numbers. The apex of Beethoven’s cello music is definitely the Triple Concerto for violin, cello and piano, one of the works we have performed frequently and gladly. The cello part is immensely challenging.

Will you be playing some of the trios featured on the album at the concerts you are scheduled to give?
Jan Talich: Beethoven’s trios are part of our core repertoire. We will also perform them at concerts, to which we are really looking forward. And not just because of the new album. If the situation will so allow, we should give performances in Italy and Portugal, and we are scheduled to tour the USA. But we also enjoy concerts in the Czech Republic – over the next few months, we should tour Moravia and visit a number of beautiful places in Bohemia.

Which pieces do you like to combine with Beethoven’s trios at concerts?
Jitka Čechová: We have often performed his works along with 20th-century music, with one of the wonderful combinations being Beethoven and Shostakovich.
Jan Páleníček: Beethoven’s music is so incredibly communicative and so stylistically distinct that it always fits wonderfully with 20th-century, as well as Romantic pieces.