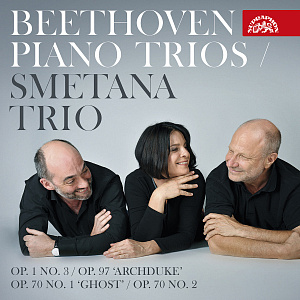 After the set of three piano trios Ludwig van Beethoven deemed to be substantial enough to be designated as Opus 1, it was evident that the artist would not only respect, but also examine, advance and co-create the rules of composition. As was the case of other pieces, they attest to his experimenting with the form and harmonic techniques used in this instrumental combination. Beethoven’s piano trios are featured on the new album made by the Smetana Trio. The pianist Jitka Čechová said: „We know from history that this type of piano trio crystallised during the era of Classicism. In his early works, Beethoven still foregrounded the piano, and only later did the other two instruments become equal, which is clearly heard on our new album.“

The 250th anniversary of the birth of one of the greatest composers of all time served for the Smetana Trio as an irresistible impulse for making the new album. „Naturally, it was one of the major stimuli for us and the Supraphon label alike. Ludwig van Beethoven’s music is extremely challenging to perform. I personally perceive it as a bridge between Classicism and Romanticism, the style which his later opuses actually ushered in. It thus depends on the sensitivity of the performers to realise in which of Beethoven’s cre­ative periods they are,“ the cellist Jan Páleníček pointed out. The violinist Jan Talich added: „Beethoven’s trios are part of our core repertoire. We will also perform them at concerts, to which we are really looking forward to. And not just because of the new album. If the situation will so allow, we should give performances in Italy and Portugal, and we are scheduled to tour the USA. But we also enjoy concerts in the Czech Republic – over the next few months, we should tour Moravia and visit a number of beautiful places in Bohemia.“