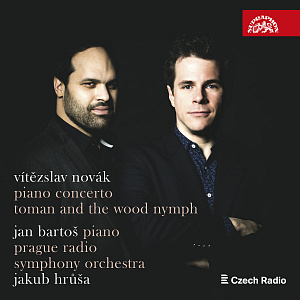 The greatest Czech classical music creators include Antonín Dvořák, Bedřich Smetana, Leoš Janáček, Josef Suk, Bohuslav Martinů … and Vítězslav Novák, a pupil of Dvořák’s and later on a highly distinguished composer and teacher. This year’s 150th anniversary of Vítězslav Novák’s birth affords the opportunity to take a closer look at his oeuvre – and to rediscover that which has been overlooked. The new album, made by Jan Bartoš in collaboration with the conductor Jakub Hrůša and the Prague Radio Symphony Orchestra, contains Novák‘s Piano Concerto in E minor, the piano cycle At Dusk, Op. 13 and Toman and the Wood Nymph – Symphonic poem for large orchestra, Op. 40.

Born on 5 December 1870 in Kamenice nad Lipou, Vítězslav Novák was a Late-Romantic and the first of the generation of Czech Modernists, yet he also drew considerable inspiration from Moravian folk music. The idea of making the first studio recording of the Piano Concerto in E minor was enthusiastically endorsed by the superb Czech pianist Jan Bartoš, who said: „When, five years ago, I was studying the Piano Concerto in G minor by Antonín Dvořák, I ascertained that Vítězslav Novák, a renowned student of his, wrote a piano concerto too. Later on, I found out that, even though Novák’s work had been performed in Prague, it was neglected. And when I first played it for myself, I resolved to learn the piece. Following several performances at concerts and positive responses, Supraphon and I agreed that Novák’s concerto certainly deserved to be recorded.“

As regards the piano cycle At Dusk, Op. 13, Jan Bartoš pointed out: „Vítězslav Novák wrote many intimate lyrical pieces for the piano. The cycle is the last work dating from Novák’s first, let us say, Romantic, period, while also ushering in his next creative phase, in which he embraced Moravian/Slovak folk music. Contrariwise, the two Serenades evoke the melancholy atmosphere in Prague at the end of the 19th century. Although ranking among the least-known Novák cycles, I personally deem At Dusk one of the most engrossing of his opuses.“

The conductor Jakub Hrůša selected for the album the tone poem Toman and the Wood Nymph, which may be considered the most ambitious of Novák’s symphonic works. As the composer himself put it, he strove to express an „uncontrollable torrent of wild passion“, referring to the piece as an „orgy of sound“ and the ballad as a „depiction of woman’s demonic power over man“. Jakub Hrůša, a globally acclaimed contemporary conductor, invites us to rediscover Novák’s music: „We are obliged to perform it. His music is so profound and far-reaching that we simply cannot ignore it and let it gather dust in archives and remain buried in music history textbooks.“

Supraphon will release the album on 11 September 2020, on CD and in digital formats.