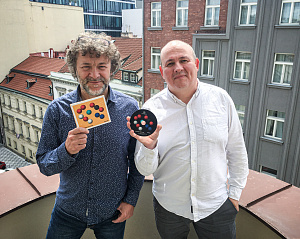 Since 12 June, Clarinet Factory’s new album, Pipers, has been available in digital and physical formats (Clarinet Factory Pipers). The internationally renowned Czech quartet have yet again shifted their sound a few levels further and, with their inherent playfulness, have transcended the traditional understanding of the clarinet, exploring the instrument’s po­tential. The music is truly unconventional, genre-blending, yet all the more captivating and compelling. The new album has met with laudatory reviews, with critics worldwide pointing out Clarinet Factory’s sin­gularity. As the band have revealed, we can also look forward to live performances and other treats…

“Given the Covid turmoil, we didn’t really make any plans for the summer, yet now we have received quite a few invitations. Whereas with respect to the ongoing uncertainty large-scale festivals are out of the question, smaller events afford a greater chance for us to perform. For a long time, we have been scheduled to make an autumn tour, within which we should give concerts at venues in the Czech Republic, but also Latvia, Germany and Slovakia, as well as Portugal, where we originally planned to play in the spring. Moreover, we start to produce new video clips and new, novel visualisations. There is definitely something to look forward to …,” said Jindřich Pavliš, the frontman of Clarinet Factory, a crossover ensemble, who over the long term have enjoyed international popularity and acclaim.

Music connoisseurs all over the world have hailed the Czech four-clarinet formation. “Clarinet Factory take us on a musical journey where different genres interact with each other in the most gentle and sophisticated way … and the result is simply magical,” said Alfredo Caxaj, the artistic director of Sunfest, Canada, where Clarinet Factory performed last summer.

“When I walked in on their showcase a few years back in Ostrava, I had no idea what to expect. I was even somewhat sceptical about a band calling itself a “factory”. But when they started playing, I found myself nailed to the floor. Amazing harmonies, wonderful sonority coming from the bass clarinets, adventurous compositions and an endless variety of moods and atmospheres. It was as if they were weaving a magical carpet of sound,” the Dutch musician, composer, photographer and music writer Ton Maas recalls.

Simon Broughton, the editor-in-chief of Songlines, wrote: “Clarinet Factory are a quartet with a unique line up. Three clarinets plus bass clarinet – and vocals. This sound takes them from indie into jazz and folk. Inventive, alternative, radical. Seeing them perform, they have a trance-like effect on an audience.”

The Czech “borderline” music specialist Petr Dorůžka commented on Clarinet Factory’s mastery as follows: “Working with just one palette of instrumental colours pushes the imagination to the limit. You have to rethink how the clarinet is used in common settings, and step-by-step build up new rules. Just imagine living inside a particle accelerator, speeding up new ideas and avoiding everyday clichés. But you need a reference point outside the clarinet magic. For Clarinet Factory it is the human voice, used like a rare spice, just to enhance the taste of the instrumental brew. The resulting blend works differently in each case, but always it is a mystery worth further exploration. Enjoy!”

Diverse, hypnotic, resonant and magical, combined with a captivating and contagious playfulness, Clarinet Factory’s music is extraordinary and remarkable. And their live performances feature such qualities even more palpably.

“When performed live, the previous titles often came across as more chamber-like. Yet now, in addition to all kinds of clarinets, we are equipped with an arsenal of loopers and effect processors, which we use directly on stage. As a result, four clarinets too may generate a pretty robust sound, especially when boosted by the percussion section sampled from Pepín’s bass clarinet slap tones and Vojta’s vocals. And there is also Milan Cimfe, who supports us with electronics, as well as percussion,” Pavliš said with regard to the current Clarinet Factory sound.