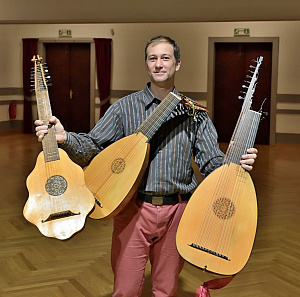 ABOUT HIS NEW ALBUM CODEX JACOBIDES

On 12 June 2020, Supraphon released the album featuring pieces from a fragment of the Codex Jacobides, one of the major Czech sources of lute and instrumental music performed in Prague c. 1600. We talked with the lutenist Jan Čižmář a few days before the album’s release on Supraphon.

You studied the lute with truly distinguished specialists, among them Nigel North, Joachim Held and Jacob Lindberg. How do you remember that time?
Those were amazing years, with every day opening a new chapter, affording new musical experiences and contacts. I made friends with a number of musicians, who have inspired me ever since. Nigel North in particular has largely influenced me as a player and teacher. The same applies to Joachim Held, with whom I have given frequent concerts, rediscovering the repertoire for two lutes. By the way, pieces from the Codex Jacobides will feature in our autumn performances.

The lute was the most popular instrument in Europe in the 16th and 17th centuries. How did you get to it centuries later?
I started with the guitar, naturally… I played the guitar by the campfire, in the garage, in music clubs, at parties, as well as at New Year’s Eve gala concerts at the Lucerna in Prague and Grandhotel Pupp in Karlovy Vary next to pop stars. I was also engaged in theatre and musical productions, with big bands. Then I went on to study classical guitar at the conservatory. Ultimately, the things somehow cut through and I got to the roots – perhaps subconsciously inspired by Spirituál kvintet’s songs. I arrived at the lute, an immense special chapter, something like music archaeology, combining history, art and culture in general. I actually hail from a family of archaeologists.

What was the most challenging aspect of making the recording?
Finding the right balance between performance and research. On the one hand, I was an editor, who knew about all the errors and mistakes in the manuscript, as well as about what could have been or should be different. On the other hand, I was a musician aspiring to entertain the listener, to pass on joy and beauty. I believe I have succeeded in remaining faithful to both our ancestors’ legacy and myself, my own interpretation of long-forgotten melodies.

What pleases you the most in relation to the album?
The fact that it links up to the work carried out by Jiří Tichota (note: a Czech musicologist, lutenist, singer and lyricist, the founder and artistic director of the Spirituál kvintet ensemble, whose great-grandfather was the first teacher of Antonín Dvořák; he studied musicology at the Faculty of Arts of Charles University, graduating with a doctorate with the thesis on intabulations of songs and vocal compositions in 17th–century Prague lute tablatures). Getting together and working with him is actually a dream come true. Mr. Tichota is a wonderful person and a great musician alike. And he managed to explore the history of the lute before my generation was even born. The album simply could not have materialised without him.
I am also happy that the recording features such a variety of pieces. It is not an ordinary album of music for solo lute, but a truly colourful mosaic of the repertoire. I am pleased by the participation of my colleagues, who added flavour to the splendid songs. And I am particularly delighted by the resulting sound of the compositions in which I play several instruments successively – such an approach was somewhat risky, as only in the studio and after mixing them could we actually see that we indeed had taken the right path. It was a modern studio work, which is not customary in the classical discipline. Yet I believe that if musicians had had such technical opportunities in the 17th century, they too would have made use of them… I would like to extend my great thanks to the recording director Jakub Hadraba for the excellent job he did.
The making of the album was preceded by intense work on the complete critical edition of the Codex Jacobides – we should bear in mind that the CD is “only” the icing on the cake of the publication of the magnificent four-volume monument to the history of Czech music, which the Codex Jacobides certainly is… After all, the CD features a full-colour reproduction of the extraordinary manuscript.
I would like the listener to know that what is noted down, what has survived and is maintained at the museum, is just a fragment of the music played in Prague during Rudolf II’s era. But we should also bear in mind that it did not sound as it sounds on the album, since every performer has his/her inimitable, singular traits…

Did you and Jiří Tichota discuss his personal view of the compositions?
I deem Mr. Tichota a great authority in this domain, so it goes without saying that we thoroughly discussed the pieces. Even though much has changed in historical performance since his lute period, in many cases I agreed completely with his intuition and opinions of, for instance, the tempos. Yet sometimes I assumed a different approach. When it comes to the better-known songs, his treatment was for me highly inspiring. Back at the time when I was learning how to play the guitar, he opened up to me the world of early music and the inherent poetics. Then everything else was added to it, with my path to the lute actually being just a recollection of the songs Růžička (Little Rose) and Podzimní (The Autumn Song), which I previously used to play by the campfire. My participation in several Spirituál kvintet concerts was thus a marvellous, unforgettable experience.

Could you say something about the instruments you play? They are not entirely common.
Every one of them is unique. Some are more common, with the Renaissance lute probably being the most familiar to everyone who has heard something about early music. Others, such as the orpharion, are true delicacies, even for specialists. My instruments are from the workshops of master lute makers from all over the world, with perhaps the most precious of them being the double-necked lute built by the legendary Michael Lowe, which was previously in the possession of Anthony Rooley and which has been played at hundreds of concerts and featured on dozens of albums of the even more legendary British early-music group The Consort of Musicke. This very lute regularly accompanied the sopranos Emma Kirkby and Evelyn Tubb, who is a good friend of mine. It is as though parts of these artists’ souls have remained in the instrument for ever.

Do you intend to perform the music featured on the new album at concerts?
Absolutely. I was actually supposed to tour China, the USA, Chile, Argentina and Brazil in April and May. Scheduled for June was a gala concert in Prague, prepared in collaboration with the National Museum – Czech Museum of Music, within which the CD and the complete critical edition, on which the album is based, were to be launched. Regrettably, all the plans fell through due to the coronavirus pandemic. Yet in the autumn I should be giving several solo concerts in the Czech Republic, and the said gala concert and launch of the album and the edition should take place too. As regards the American tour, I hope it will come to pass as soon as possible. Should the coronavirus situation so allow, the music featured on the album will also be performed in Germany, Austria, Poland and Slovakia, either solo or in various chamber combinations.