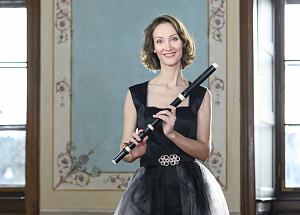 Eight years after the release of the album Solo for the King, the flautist Jana Semerádová, the artistic director of Collegium Marianum, an internationally renowned ensemble specialised in Baroque music, has made a similarly conceived CD, titled Chaconne for the Princess. While on the previous occasion she presented the music performed at the court of Frederick II, King of Prussia, in Potsdam, this time she and the superb Austrian harpsichordist Erich Traxler invite the listener to London, where Princess Anne, the daughter of George II, was taught by George Frideric Handel.

We talked to Jana Semerádová about the new release:

Jana, in what respect does your new album link up to the CD Solo for the King?
I recall that when I was recording Solo for the King, I clearly wanted to make use of the music I am fond of so as to pay tribute to Frederick II, the greatest royal flautist. I am in my element with the album’s repertoire – heartfelt sonatas by František Benda, Carl Philipp Emanuel Bach, and Johann Joachim Quantz, as well as one of the most wonderful sonatas for flute created by Johann Sebastian Bach. Eight years later, without anyhow planning it, my desire to record Leclair’s sonatas brought me to another royal court, this time „in the services“ of Anne, Princess of Orange, whose fate was connected with Handel too. And as regards the title, Chaconne for the Princess, it aptly reflects the content of the album, which was a logical next step on my musical journey through royal courts, following the visit to the Sanssouci palace.

How difficult was it to select the repertoire, and what is the album’s objective?
I wanted to record both the well-known works and the lesser-known pieces, which were part of Princess Anne’s artistic milieu, yet would also represent something like a light, almost dance bridge between the more serious Leclair sonatas and Handel’s extensive harpsichord suite. I must admit it took me a while to arrive at a repertoire that I deemed entirely satisfactory. I intended to include on the CD the splendid chaconne from Handel’s opera Parnasso in festa, written for the wedding of Anne and William of Orange. And I ultimately had the good fortune to discover, by chance, the chaconne’s period arrangement while exploring Handel’s collection Lessons for the Harpsichord.

The life story of Princess Anne is fascinating too. How do you personally perceive it?
When it comes to Princess Anne’s life, I first had to find information in foreign publications. The more I read about her the more I admired the music-loving aristocrat. The eldest daughter of the future King George of Britain, when she was a child her family moved from her native Hanover to London, where she could cultivate her multiple talents – in addition to learning foreign languages and dance, she studied painting and music. She was fortunate indeed to have been taught for 11 years by a master as accomplished as George Frideric Handel, who, however, as he himself claimed, did not anyhow aspire to gain the post. The celebrated composer hailed Anne as his best pupil, praising her dexterity and proficiency, owing to which Anne matched professional musicians. Attesting to the affection between the teacher and the pupil is the celebratory opera Handel wrote for her and William of Orange’s wedding. After moving to The Hague, Anne surrounded herself with outstanding artists, among them the painter Herman van der Mijn and the virtuoso violinist Jean-Marie Leclair, who would dedicate to her a book of sonatas, two of them written for the flute. We can only surmise as to how the sonatas were performed – whether by Leclair himself, accompanied on the harpsichord by Princess Anne, within one of the numerous concerts she held.

When did you begin to work with the harpsichordist Erich Traxler?
The Viennese harpsichordist Erich Traxler and I have known each other for years. He is a member of the several prominent Austrian ensembles with whom I have frequently performed. On one such occasion, I heard him play as a soloist and was impressed by his style. And since Erich is also an excellent basso continuo player, I invited him to Prague to work with Collegium Marianum. Consequently, he would appear before the local audiences in a number of programmes featuring different styles, thus showcasing part of his virtuosity as a versatile harpsichordist and organist.
What was the recording process like and where did you record?
The recording sessions took place at the beautiful premises of the Martínek studio, which previously served as a dance hall. That is probably why I played all the chaconnes, contra-dances and gavottes with such levity… But seriously. The studio has ideal acoustics for chamber ensembles, and I am glad when the space has a natural reverberation. Erich and I could hear each other perfectly. And although we hardly saw each other, we could all the more speak together through music. We did not use pencils much, as we remembered that which we “talked” about in the music. The „conversations“ were never identical even when we started repeatedly from the same bar. That, naturally, complicated the work for the recording director Jiří Gemrot and the sound engineer Aleš Dvořák, yet they know me and are true masters in their respective disciplines, so they are able to use ample musical ideas in the manner that results in a lovely recording.

Do you and Erich Traxler plan to perform the music featured on the album at concerts?
Yes, I look forward to presenting this programme next year at the Summerwinds festival in Germany and at subsequent performances.

Have you started giving thought to your next recording?
I am rather a concert type of musician, I need audiences. That which happens at concerts cannot actually be captured. On the other hand, making albums involves unforgettable moments with brilliant partners, recording directors and sound engineers, moments for which it is worth standing at the microphone, closing your eyes and letting yourself be carried away by the Muses. So if I feel inspired by something in the future, I will definitely let myself be seduced to another recording project. So far, I haven’t really given it much thought, but while writing this sentence I may come up with an idea of how to complete the royal trilogy.