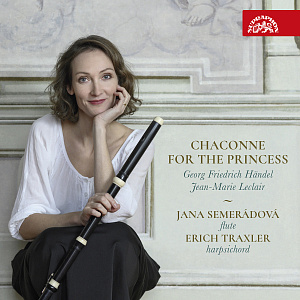 MADE WITH THE HARPSICHORDIST ERICH TRAXLER

Eight years after the release of the album Solo for the King, the flautist Jana Semerádová, the artistic director of Collegium Marianum, an internationally renowned ensemble specialised in Baroque music, has made a similarly conceived CD, titled Chaconne for the Princess. While on the previous occasion she presented the music performed at the court of a Prussian King in Potsdam, this time Jana Semerádová and the superb Austrian harpsichordist Erich Traxler invite the listener to London, where Princess Anne, the daughter of George II was taught by the celebrated composer George Frideric Handel. Supraphon will release the album on 24 April 2020 on CD, as well as in digital formats (MP3, FLAC, HI-RES).

During the Baroque era, taking music and art lessons was an integral part of the education of children in royal families. Anne, Princess of Orange (1709–1759), the eldest daughter of King George II of Great Britain, was fortunate in having excellent teachers. At the age of five, she moved from her native city of Hanover to London, where for eleven years her musical talent was cultivated by George Frideric Handel, a famous composer and keyboard virtuoso. Under his guidance, Anne became an outstanding harpsichordist. Handel dedicated a number of works to the Princess (among them the wedding serenade Parnasso in festa), while other, highly popular, pieces of his were arranged, including by the virtuoso flautist Michel Blavet. Following her wedding and departure from London, Anne no longer took harpsichord lessons, yet at the court in The Hague, her new home, she remained faithful to the Muses and surrounded herself with excellent artists. For several years, the court employed as Kapellmeister the superb violinist Jean-Marie Leclair, who dedicated to Anne his fourth book of solo sonatas. In the case of some of them, he mentioned – to the delight of all flautists – the possibility of their being performed by „flûte allemande“ as an alternative solo instrument.
„A few years ago, Collegium Marianum and I gave a concert featuring the programme titled In the services of the Princess – we performed pieces by Jean-Marie Leclair, who for some time worked at the court of Anne, Princess of Orange, in The Hague. I have always been fascinated by Leclair’s music, particularly due to its natural dance quality coupled with exacerbated harmony, arched over by a lovely melody. At the time, I began taking an interest in the music-loving Princess, a gifted pupil of George Frederic Handel’s and a patron of the arts. Her remarkable personality then gave rise to the idea of combining the sonatas Leclair dedicated to Anne with Handel’s compo­sitions for the harpsichord his royal benefactor might have played,“ Jana Semerádová said.

As a soloist, the flautist Jana Semerádová has collaborated with distinguished early music specialists (Sergio Azzolini, Alfredo Bernardini, Enrico Onofri, and others) and given concerts at prestigious festivals (Utrecht, Leipzig, Halle, Versailles, Sablé, Regensburg, etc.). Erich Traxler is a no less outstanding soloist and chamber player, who has appeared at the most renowned concert venues worldwide. Princess Anne and her love of music inspired the two exceptional artists to make a themed album. Jana Semerádová pointed out: „Erich is not only a splendid soloist, he is also great in basso continuo phrasing. He breathes in the same way as his partner, while bringing new impulses to the playing – with him, it is like having a well-balanced conversation, you don’t actually have to say much. I really enjoy working with him. The album includes one of the most extensive and most challenging of Handel’s harpsichord suites.“