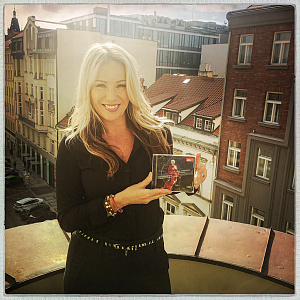 JITKA HOSPROVÁ ABOUT HER NEW ALBUM OF CZECH VIOLA CONCERTOS

On 27th March, Supraphon released the new album by Jitka Hosprová made with the Prague Radio Symphony Orchestra featuring works by Jindřich Feld, Oldřich Flosman and Sylvie Bodorová. Jitka Hosprová talked to us about her relationship to Czech contemporary music and its authors as well as about her colaboration with the orchestra.

Your new Supraphon CD features works by three 20th- and 21st-century Czech composers – Jindřich Feld, Oldřich Flosman and Sylvie Bodorová. Why did you choose contemporary Czech music in particular?
The music actually chose me. I encountered the works over the past decade or so. In 2008 and 2009, upon the invitation of the Prague Autumn festival, I performed Jindřich Feld’s concerto and Oldřich Flosman’s Visions of Michelangelo. I was truly enthralled by the latter’s beauty. Even though I was familiar with Flosman’s con­nections with the former regime, and I definitely reject totalitarianism, I decided to overlook the political circumstances and solely perceive his music as music. And this piece of his is simply great. Flosman’s music for the viola is amazing, and the composer and the violist Lubomír Malý created a truly wonderful work.
When it comes to Jindřich Feld, I met him when I was working with the Bohemia Luxembourg Trio, with whom I premiered and recorded his Concertino for Flute, Viola and Harp. He approached me, asking whether I would be willing to explore his Concerto for Viola, which he had written to commission for a French violist – he wanted it to be performed by a Czech musician too. Feld addressed me, because he was impressed by my approach to work. I was really pleased that the composer himself asked me to play his piece.
Another reason why I selected the three works is that they are scored for the viola and the large symphony orchestra. As regards Sylvie Bodorová’s Plan­ctus, I have performed it at several concerts. Sylvie only conceived it a few years after Flosman completed his Visions of Michelangelo, yet she assumed a different political perspective…

Your previous recordings, of solo, chamber or concert music, both Czech and international, contain a considerable number of pieces dating from the 20th and 21st centuries. Would you say that the viola had previously been neglected?
That is not the case, and I think that I will include music for the instrument dating from other periods on my future recordings. Yet the golden age of the viola was the late 19th and the 20th centuries, and it has continued into the 21st. For a long time, the viola was deemed to be an ancillary instrument in the orchestra, an integral component of the string quartet, whereas it was seldom paid attention to as a solo instrument. But the 20th century began clearly regarding it as an interesting solo instrument. I enjoy familiarising myself with and developing its new role, the viola’s potential and the space it can fill.

Yes, for a long time, the viola – unlike the violin – was not considered to be a concert instrument. How do you perceive the difference between the two instruments’ possibilities? What precisely has the viola to offer?
There is indeed a huge difference between the potential of the violin and that of the viola. Violinists must show a much greater philosophy in respect of their approach to compositions. Today technical skills are a matter of course, yet being capable of dealing with an area featuring no technical finesses, only music, is proof of the performer’s ma­turity. Many a time, pieces for the viola embody the composer’s most profound message, as numerous major creators wrote works for the instrument in the twilight of their lives. These include Shostakovich’s So­nata for Viola and Piano, Op. 147, and Bartók’s Viola Concerto. And, for that matter, Jindřich Feld’s Concerto for Viola, which was the final large-scale piece for a solo instrument and orchestra he wrote. When I listen to these works, I have the feeling that the composers are opening their hearts, conveying something intimate – and the instrument affords scope to deeper philosophising, as well as a certain degree of expression that can be interpreted in a variety of ways … for instance, as the view of life from the perspective of someone on the cusp of departing. I think the viola in particular can render this aspect very well. And the performer must be capable of communicating it, as it is something that really strikes the audience. In many slow passages, the viola’s timbre can even make you cry, since the instrument is capable of imparting the profundity very forcibly.

Whereas you performed Oldřich Flosman’s concerto upon request and after the composer’s death, in the cases of Jindřich Feld’s and Sylvie Bodorová’s pieces you actually met their creators. Does it help to consult composers about how to construe their music?
Jindřich Feld and I went through his concerto together, listening to and discussing the existing recording. He explained to me how to approach it, also telling me that certain passages could be played differently, so it was highly beneficial. Unfortunately, he did not get to hear my performance, as by the time I gave the Prague premiere of his work he had passed away. On the other hand, Sylvie Bodorová and I collaborated very closely. She was present in the recording studio and, what is more, I had previously had the opportunity to perform her piece on three occasions, thus getting used to it and establishing my position. Yet it is a radio recording, and her composition would sound better amidst a spiritual milieu. In this connection, I am glad that I had played it several times at a beautiful church, and thus could project the music’s spirit to the recording. One evening, Sylvie and I had a long conversation into the wee small hours, during which she described the genesis of her work. The situation now is different, yet at the time – in the 1980s – in Czechoslovakia, when artists did not enjoy creative freedom, she, as a student, really felt the need to express the oppression. Sylvie was even worried whether the title Planctus would be approved by the then regime, hence, she had ready an alternative name – the neutral “Music for Viola
and Symphony Orchestra”.

The interval within which the three pieces featured on your new album were created spans three decades. Do they have anything in common or is the different time of their origination palpable?
What the three works have in common is the orchestration, the viola being in stark contrast to the robust orchestral sound. They are scored for ample percussion in all three parts, they afford great scope to the viola as a solo instrument, and all of them also comprise passages in which the viola drowns in the immense sound, with its voice simply being submerged amid the tumult of the large orchestra, which I find really enjoyable. And I must admit that when later I listened to all the pieces, I was certain that the selection was a good idea. That is what I deem to be the connecting link.
And the difference? I think that the earliest track on the recording – Jindřich Feld’s concerto – reveals that the composer was no longer affected by the frustration prevailing in society, and thus created a truly free work. Feld conceived the viola part in his own way, not being afraid of the technical aspect. He would to tell me “… don’t worry, everything I have written is playable…” – after all, he himself was a dexterous violinist. Feld composed a brilliant piece, which can present the viola very well in technical terms. The viola is not only assigned long touching phrases, its part contains quite a few technically challenging tracts. So I think that every listener can find in it something intriguing.

You have recorded the three concertos in a studio with the Prague Radio Symphony Orchestra. What was it like to work with the conductors who participated in the making of the album?
It took several years to complete the album. Over that time, Czech Radio teams changed. I am happy we have succeeded in bringing the project to fruition. Jindřich Feld’s concerto is conducted by Jan Kučera, who was acquainted with the work, as we had premiered it together. When it comes to Sylvie Bodorová’s Plan­ctus, it was new to him. It was my very first collaboration with Tomáš Brauner, who conducts Oldřich Flosman’s Visions of Michelangelo, and it was great, as his account of the piece is precisely how I had imagined it to be. I performed it earlier with the ORF Vienna Radio Symphony Orchestra under the baton of Bertrand de Billy, and I must say that at the time we had to work much harder to be able to express the concerto’s we­ightiness and fatefulness, all its nuances. The Prague Radio Symphony Orchestra grasped all that as something natural, perhaps due to their comprehending of what it was like for the country having been occupied for four decades. Everyone immediately understood the gravity. By and large, the recording sessions were pleasant encounters with two outstanding conductors.