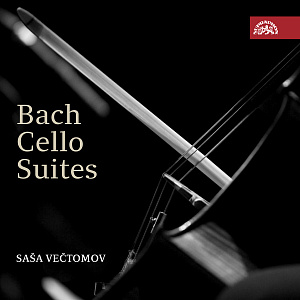 AS PERFORMED BY SAŠA VEČTOMOV

On 27 March 2020, Supraphon will release a timeless recording of Bach's Cello Suites performed by an excellent Czech cellist Saša Večtomov. The album will be available on CD as well as in digital formats.

Bach Cello Suites are a great challenge for everyone who has mastered the cello, Saša Večtomov included. His first teacher was his father (he studied in Paris with Piatigorsky and Fournier and with Casals's assistant Alexanian). The playing of the young Večtomov was then strongly influenced by Rostropovich's te­acher Semyon Kozolupov at the Moscow Conservatoire and by André Navarra in Italy. Besides his solo career, he also excelled at playing chamber music (Czech Trio, City of Prague Quartet) and was an equally wonderful teacher.

For the recording of the Bach suites Saša Večtomov prepared himself for several years. He was the first Czech cellist to perform all of Bach’s Six Cello Suites from memory on a single evening (1980). He then recorded them in just ten days at the turn of August and September 1984 in the Organ Hall of the Rudolfinum on an Italian instrument made by Alessandro Gagliano (1712). The recording company set a condition that the complete set had to fit on two LP records, something that would be indefensible by today’s standards. For this reason, the suites were recorded without repeats. Paradoxically, however, he turned this handicap to his advantage, and the “stories” he tells through his playing are full of intense excitement.