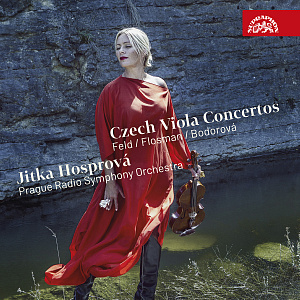 Jitka Hosprová is the finest Czech viola soloist. She has veritably proved that her instrument too can play the lead role. Her new album, made with the Prague Radio Symphony Orchestra, features three modern pieces, written within three decades, from the 1970s to the beginning of the 21st century. The CD, titled Czech Viola Concertos, to be released by Supraphon on 27 March 2020, contains works by Sylvie Bodorová, Jindřich Feld and Oldřich Flosman.

Jitka Hosprová has recorded with the Prague Radio Symphony Orchestra the today almost forgotten Visions of Michelangelo, composed by Oldřich Flosman in 1975 to mark the 500th anniversary of Michelangelo’s bir­th. The Viola Concerto, one of Jindřich Feld’s final works, can be compared with Béla Bartók’s concerto, yet it is even more technically challenging, with the demands placed upon the soloist being extreme indeed. Sylvie Bodorová’s Planctus (referring to the medieval form of “laments of the Virgin Mary”) reflects the oppression, angst and feeling of helplessness of those living in 1980s communist Czechoslovakia.

Jitka Hosprová commented on the new album as follows: „Collaborating with the Prague Radio Symphony Orchestra has always been great. Many of its members are my former schoolmates, and there has been a friendly atmosphere at all our joint concerts, as well as during recording sessions. The orchestra works with an incredible focus, they are able to learn intricate scores very quickly and play them with an immense accuracy. That is really important, especially for a soloist performing a part challenging in both technical and expressive terms. The recordings were made with the lowest number of interventions possible, with the aim for them to sound naturally, like a concert – it is the style that agrees with me, and in this respect the orchestra was a splendid partner. A great advantage was that we had previously performed together Sylvie Bodorová’s Planctus and Jindřich Feld’s concerto at a concert.“

In all three pieces, the viola’s profound intimacy is in stark contrast with the orchestra’s robust symphonic sound. More than any other instrument, the viola can convey the composer’s in­nermost feelings and ideas. Jitka Hosprová’s album, featuring a revelatory repertoire performed with technical brilliance, brings back to life compositions that richly deserve to be paid attention to by musicians and listeners alike.

The album Czech Viola Concertos will be released on 27 March on CD and in electronic form for download.