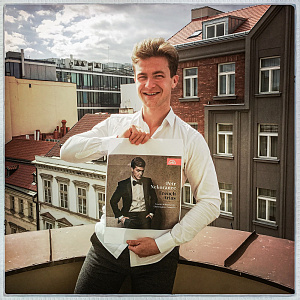 FOR HIS DEBUT ALBUM

Petr Nekoranec has garnered a number of accolades at renowned European competitions. In January 2017, he won one of the most prestigious, the Concurso Francesco Viñas at the Gran Teatre del Liceu in Barcelona, where he also received the Plácido Domingo Prize. Supraphon has released Nekoranec’s debut album, made with the Czech Philharmonic, conducted by Christopher Franklin. The recording features French arias.

Petr, what did you select for your debut album?
I opted for French arias for leggero tenor, striving to pick something that has occupied a special position in my personal and professional life alike. That is precisely what French arias are.

What was the impulse for making this album?
To tell the truth, I myself did not feel that the time was ripe for me to make a solo recording. The idea actually came from my agent, Alena Kunertová, who suggested it to the Czech Philharmonic. The orchestra’s re­presentatives agreed, so we decided to get going on the project.

In May 2019, you had a solo Baroque recital in Prague within one of the Prague Symphony concert cycles. At the Staatsoper Stuttgart, whose soloist you have been since September 2018, you are currently mainly performing in Rossini’s operas. What is the basis of your repertoire today?
I am, and have always been, glad that my repertoire has been wide-ranging, from Baroque right the way up to Romanticism. At the present time, I would define myself as a young lyric tenor, which is an extensive category indeed. Of late, I really have mostly performed Rossini roles, yet this season I am also scheduled to portray in Stuttgart the Holy Fool in Boris Godunov, which will be a step in the direction of more lyric parts. Yet before plunging into this recording, my voice had grown a little bit – which certainly was not planned – and it is becoming somewhat fuller, thus opening scope to other roles, so I hope I will soon sing Mozart roles on stage too.

But your debut album solely features French music, which – as you have said – is close to your heart. Have the arias been part of your regular repertoire, or did you newly explore them for the present recording?
Most of them were new to me. Another factor that prompted me to choose these French arias in particular was the response to the solo recital the pianist Vincenzo Scalera and I had at the Rudolfinum. The audience said: “The concert was wonderful, yet the most wonderful was the French aria (“Fantaisie aux divins mensonges” from the opera Lakmé). It was an entirely unknown aria. At the time, I realised that French arias could be my secret weapon.

Yes, French arias really do appear to be your very powerful secret weapon. After all, performances of two of them have earned you great acclaim.
Absolutely. Nadir’s aria, from Georges Bizet’s Les pêcheurs de perles, and “Ah! Mes ami”, from Gaetano Donizetti’s La fille du regiment, are the two gems owing to which I have gained success at competitions, either having won them or received some prize. But most significantly, the arias made it possible for me to study opera in Munich, as well as at the MET.

It would seem that you have been destined to sing French arias. Do any of those you did not perform prior to making your debut album will become staples of your concert repertoire?
All of them, I think. The French repertoire is like a Pandora’s box, it encompasses a myriad of arias – primarily for tenor, and my tenor type in particular. I myself have found 23 arias, from which we had to make a selection, as we simply could not fit so many on a CD. We ultimately chose 11 arias and one duet. I intend to keep all the arias in my repertoire, especially the concert one. Maestro Christopher Franklin and I would like to make a small tour with the French repertoire, because both of us really like it, and it is highly attractive.

What music is featured on your debut album?
Music by Jules Massenet, Charles Gounod, Gaetano Donizetti (although he was Italian, the aria is in French), Georges Bizet, Hector Berlioz and Edouard Lalo.

You have made the album with the Czech Philharmonic and the conductor Christopher Franklin. How did the recording go? Had you worked together previously?
We had not worked together before, we only met once prior to getting down to the recording, in Milan, to figure out and rehearse the arias. I would like to stress that my collaboration with the Czech Philharmonic and maestro Franklin was very pleasant. I have the feeling that ever since the then chief conductor Jiří Bělohlávek introduced me to the orchestra, they have treated me as one of them whenever we have collaborated on a project. This attitude was also evident during the recording sessions, when we were stressed, had to make it in time, as we had only allocated five frequencies … They were even willing to stay longer, five minutes after a frequency had finished, so as to record the whole aria. Our working together was truly amazing.

How long did it take you to complete the recording and where did it take place?
The recording took place at the Dvořák Hall of the Rudolfinum, and we had five three-hour frequencies, that is, two and a half days, which is a very short time. But recording is not cheap, and it involves numerous people. We were rather pressed for time, yet I believe that it has not negatively affected the recording’s qu­ality.

So it was really intense work. What was more draining – the physical or the mental strain?
I must admit that never previously had I felt such physical pain for three days. And I could hardly keep my eyes open. Over the three days of rehearsals and recording, we expended an incredible amount of energy. I must confess that I had no idea it would be so exhausting.

How did your voice cope with such extreme exertion?
I took some vitamins, of course, and did my best to give it a rest, so I did not speak unless I had to. But I must say I am really proud of the voice, as it handled it well … I also helped it by having some beer (maybe it was on the Instagram), since it is a source of vitamin B and it does have a soothing effect on the vocal cords, with the bubbles pleasantly freshening the throat. So I opened a bottle of Pilsner on the stage, and all the Czech Philharmonic burst into laughter…

Do you take any special care of your voice?
I strive to observe a healthy lifestyle in general – healthy food and sufficient sleep. There is no better medicine for your voice than sleep. And, first and foremost, I try to sing and rehearse in a healthy way, so as to keep my vocal cords fit. After all, vocal cords are a muscle – when you don‘t keep a muscle in shape, it gets tired easily, whereas when you keep it reasonably active, its productivity is the highest.

Have you given thought to any interesting new project, either recording or concert?
Yes, I have already made up my mind, we are just waiting for the appropriate opportunity. I would love to record Janáček’s The Diary of One Who Disappeared. Janáček’s music is marvellous. I was lucky and delighted to have had the chance to perform it at a concert in Stuttgart, which confirmed how much I would like to make a recording of the cycle.

What is your relation to the Czech repertoire?
I am quite sad that the Czech repertoire doesn’t contain a wide scale of roles for my tenor type. I have sung Vašek, but I am yet to grow into Jeník and the Prince … And all other Smetana and Dvořák operas are far more dramatic. So I would say that, when it comes to the Czech repertoire, in the foreseeable future it will be Janáček’s works in which I will be able to bring my voice to bear.