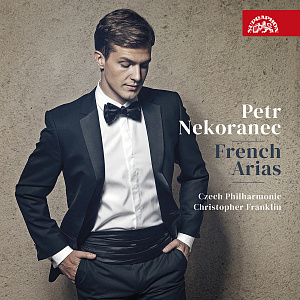 Petr Nekoranec has garnered a number of accolades at renowned European vocal competitions. His debut album, featuring French arias and recorded with the Czech Philharmonic, conducted by Christopher Franklin, is being released in collaboration with Nachtigall Artists Management, the Musical Talents Fellowship and the Supraphon label.

His star has to date shone the brightest in January 2017, when, at the age of 25, Petr Nekoranec won the prestigious Concurso Francesco Viñas at the Gran Teatre del Liceu in Barcelona (gaining absolute victory, as female and male singers compete together), where he also received the coveted Plácido Domingo Prize as the best tenor. Two years of studies in New York within the Metropolitan Opera’s Lindemann Young Artist Development Program expanded his experience from the Bayerische Staatsoper in Munich, preparing him for conquering the world of grand opera. The present Nekoranec's debut album, featuring French arias, and made with the Czech Philharmonic and the seasoned conductor Christopher Franklin, serves as yet more proof that he is a singer of extraordinary talent. “The French repertoire is like a cornucopia, it encompasses a myriad of arias – primarily for tenor, and my tenor type in particular. I myself found 23 arias, from which we had to make a selection for the CD. We ultimately chose 11 arias and one duet, which I perform with the soprano Zuzana Marková. I will strive to keep all the arias in my concert repertoire, as maestro Christopher Franklin and I would like to make a small album-related tour,” said Petr Nekoranec, who went on to specify the composers whose music features on the album: “Jules Massenet, Charles Gounod, Gaetano Donizetti, who was an Italian, but the aria is in French, Georges Bizet, Hector Berlioz and Edouard Lalo.”

Owing to his light, highly flexible, colourful tenor, Petr Nekoranec reliably masters even the most challenging virtuoso coloraturas of the Italian repertoire, while his infallible musical intuition has naturally led him to French opera, abounding in a plethora of profound and delicate emotions, amorous feelings, as well as wild merriment. Petr Nekoranec has succeeded in conveying all the nuances with a remarkable airiness, simplicity and plausibility. As if there were nothing as easy as singing … Ah! Mes amis, quel jour de fête!

The stellar young singer’s debut album, featuring French arias, recorded with the Czech Philharmonic, will be released on 31 January on CD and in digital formats.

“I would very much like to stress that working with the Czech Philharmonic and the recording team was absolutely amazing, in professional and personal terms alike. The recording process drains you entirely. During three days of recording and a day of rehearsals, I sang more than a hundred high Cs. You can imagine how exhausting the work was for all of us, yet the atmosphere was pleasant and friendly throughout. The orchestra, maestro Christopher Franklin and the recording team were fantastic, with their support being palpable all the time,” Petr Nekoranec concluded. This year, the roles the young singer is set to perform include Misail in M. P. Mussorgsky’s Boris Godunov at the Staatsoper Stuttgart, Ruodi in Giacomo Rossini’s Guillaume Tell at the Bayerische Staatsoper and Ernesto in Gaetano Donizetti’s Don Pasquale at the Staatsoper Stuttgart.