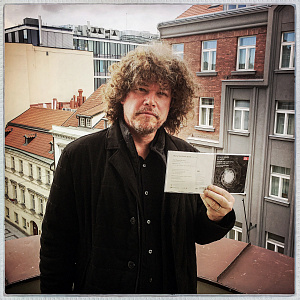 Supraphon released the fourth Czech Ensemble Baroque album featuring music by Franz Xaver Richter. How long have you been mapping the legacy of the Moravian composer?
Approximately six years of intense work, which has entailed exploration of archives, transcription of scores, performances and making recordings.

Why such an affinity to Franz Xaver Richter in particular? Why do you find him so fascinating?
Franz Xaver Richter was an Austro-Moravian composer, and we, Czech Ensemble Baroque, consider ourselves to be Moravian too. We have mainly worked in Brno, although our members hail from Moravia, Bohemia, as well as Slovakia. Richter’s family lived in close vicinity to the Holešov chateau, whose owner, Count Rottal, was a true music enthusiast, holding numerous musical events at the time when Richter was a child, in the 1720s or so. Every summer, operas were performed at the estate, where the young Richter most likely first encountered the composer Ignaz Jacob Holzbauer, who would later on serve as Kapellmeister of the renowned Mannheim court orchestra. It was probably in Holešov where Richter developed an interest in Baroque music and composition. As I have said, Czech Ensemble Baroque are based in the Zlín region in Moravia, and the Holešov chateau is a place where we have regularly given concerts, collaborated with the Musica Holešov festival, and also, over the past 15 years, organised our Baroque master classes for young artists who are interested in performing Baroque music, as well as for esteemed figures. Next year, Holešov should even be visited by the celebrated countertenor Andreas Scholl. All that, I think, gives a good answer to the question of why we are so fascinated by Richter – there simply aren’t many composers of his significance born in the Zlín region.

Richter was one of the Czech and Moravian composers who gained recognition abroad. What was his position in the cultural centres in which he lived and worked?
Richter was evidently a very ambitious man. After completing his studies, he was engaged in several places, first in small parishes in the mid-sized German cities of Kempten and Ettal, where he served as choir conductor or deputy Kapellmeister of the relatively small local ensembles. In 1746, he was hired by the Prince Elector in Mannheim – the question is whether any role in it had been played by his previous encounter with Kapellmeister Ignaz Holzbauer. Nonetheless, the court in Mannheim did employ a number of Czech musicians, including the Stamitz family. It would seem that Richter was not overly satisfied in Mannheim, as his main job was playing the viola and singing, either minor solos or with the choir. And when it comes to writing music, he was just a chamber composer, while at his previous workplaces in smaller towns he was afforded the opportunity to create really grand oratorios. Therefore, in the 1760s, Richter began seeking a Kapellmeister post, which would make it possible for him to pursue his ambition. Super flumina Babylonis, featured on our new CD, is actually the work that helped him acquire a prestigious position – that of the Maitre de Chapelle de Notre Dame de Strasbourg. All of a sudden, a little-known Austro-Moravian composer became an artist who shook hands with Marie Antoinette, mingled with Leopold Mozart and plenty of other leading musicians of the time.

What works do your previous three Richter albums contain?
The first CD we recorded features the Requiem in E flat major, the second the Good Friday oratorio La deposizione dalla croce di Gesú Cristo, the third includes the Oboe Concerto in F major and Te Deum. The current album contains the cantata Super flumina Babylonis and the setting of the Miserere in F minor.

You have mentioned that the seminal work of your new recording – Super flumina Babylonis – played a significant role in Richter’s life. Could you describe the circumstances under which it came into being?
I could perhaps compare the situation to that of Johann Sebastian Bach, when he was seeking the post of composer at the Dresden court and created for the competition the Kyrie Gloria, which he would later on use in his Mass in B minor. It would seem that Richter wrote his Super flumina Babylonis with a similar intention, that is, when he applied for the position of the Maitre de Chapelle at the Strasbourg Cathedral. Attesting to this assumption is the fact that the piece’s orches­tration is actually tailor-made for the cathedral’s en­semble, even though Richter conceived it prior to his departure for Strasbourg. He scored it for strings, two horns, two oboes, basso continuo, organ, choir and soloists. To all appearances, Richter composed the work with a view to presenting himself at the top level in France… The truth is that his piece was successfully performed in Paris at one of Europe’s most prestigious concert venues at the time – the former Tuileries Palace, in a hall with 1,500 seats, which today may be compared to Covent Garden. The critics lauded the premiere, and it is likely that a commendatory review published in the Mercure de France magazine was instrumental in paving the way for Richter’s enga­gement in Strasbourg.

What other work does your new album feature, in addition to Super flumina Babylonis, its centrepiece?
Miserere in F minor, which Richter wrote in Strasbourg in 1770, for Good Friday religious services. Its beginning may perplex many a listener, since Richter borrowed for it the theme of Pergolesi’s Stabat Mater, which he very craftily elaborated.

In what condition are the Richter works you have discovered in archives?
Very good. Richter was evidently an extremely solicitous person. We have always worked with his autographs, not contenting ourselves with copies, and his manuscripts are legible, meticulous and, with very few exceptions, they do not contain errors, which are quite common even in the case of renowned composers. As regards the autograph of the Requiem in E flat major, we could read directly from the sheet.

Who participated in the recording?
Almost 40 per cent of the Czech Ensemble Baroque singers are superb soloists, trained in early music – we apply the “colla parte” style, whereby they sing solo and chorus parts alike, with the result being a certain homogeneity and integrity of expression. My philosophy and credo is that when performing music ensembles should be in a much closer artistic and personal contact, a contact different from that common in the majority of orchestras and theatre companies. My aim is to make the atmosphere, as well as the cooperation, pretty relaxed, while retaining due respect – both for the music and for each other. At rehearsals, we always seek variants, and I ask the musicians to express their opinions. I believe that when everything is reasonably coherent, it gives rise to a different performance dimension.

Do you have another similar project up your sleeve?
We will see. We have just rounded off a phase, yet I have a few ideas regarding Richter. I have thought of his splendid bass arias, for instance, which could be bundled together within a single recording. He also wrote excellent concertos, which could be performed by soloists I have yet to select, but there are dozens more vocal-instrumental works that are worth considering. We will see how his Super flumina Babylonis will be received – perhaps it will stimulate a new Richter project. Nevertheless, I have given thought to other composers, such as Ignác Tůma, who, just like Richter, was an outstanding contrapuntist, yet he is still an underestimated creator whose music deserves to be paid systematic attention.