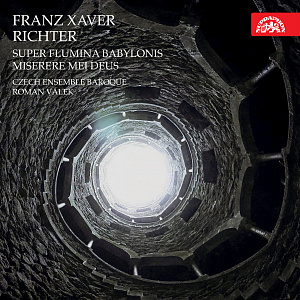 In their fourth recording of Franz Xaver Richter’s music, Czech Ensemble Baroque discover the yet to be mapped legacy of the distinguished 18th-century composer. The album will be released by Supraphon for global distribution on Friday 25 October 2019 on CD and for download.

For the 60-year-old Franz Xaver Richter, a composer of Moravian origin living and working in France, the spring of 1769 was a true watershed in his career. When, two years previously, he joined a competition held by Concert spirituel, a major French music institution, he evidently had in mind being employed as a musician in Paris. The contestants’ task was to compose a „motet à grand chœur“, encompassing a sequence of arias, ensembles and choruses, set to the Latin text of Psalm 136, Super flumina Babylonis. Although Richter failed to win the competition, his work arouse great interest and on 28 March 1769 it premiered within the Concert spirituel series at the Tuileries Palace, the largest music venue in Paris at the time.

Roman Válek, the conductor and artistic director of Czech Ensemble Baroque, said: „In music history, few composers have been as lucky as Wolfgang Mozart, with one or two hits giving rise to general interest in their music as a whole. When rediscovering works by lesser-known composers, performers must first find such hits in their oeuvre, so their music can at least become relatively attractive to listeners. Richter’s motet Super flumina Babylonis is certainly one such piece, possessing a great potential to become generally popular. The circumstances under which the work was created indicate its intention and quality. It was written for the renowned Paris-based Le Concert Spirituel ensemble, soloists of the royal opera and the cycle of concerts featuring grand motets and performed at the exquisite hall at the former Tuileries Palace near the Louvre. I believe that both fans and random listeners will be enchanted by the piece, with the result being Richter’s joining the ranks of top-class European composers of orchestral and vocal-instrumental music.“

Later on, Richter was appointed the Maitre de Chapelle de Notre Dame de Strasbourg. The motet Super flumina Babylonis undoubtedly played a significant role in his being named to the prestigious post. Over the first years he spent in Strasbourg (1770–73), Richter wrote three settings of Psalm 50, Miserere mei Deus, intended for the night liturgy of Tenebrae, a religious service held during the three days preceding Easter. In addition to Super flumina Babylonis, the present album features the third setting of the Miserere, in F minor, in a premiere recording.