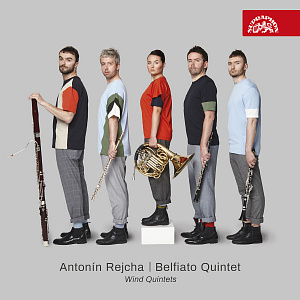 TO RELEASE AN ALBUM OF ANTONÍN REJCHA’S WIND QUINTETS

Following their critically acclaimed debut album, the Belfiato Quintet have gone back a century in time, to the „father of the wind quintet“. On 27 September 2019, Supraphon will release their recording of Antonín Rejcha’s Wind Quintets, both on CD and in digital formats.

The question as to why the Belfiato Quintet selected this particular repertoire for their second album, was answered by the flautist Oto Reiprich as follows: „It’s simple. Antonín Rejcha was the father of the wind quintet and for over two decades no Czech ensemble has made an album solely featuring Rejcha’s wind quintets. Accordingly, the choice of the music for our second album was entirely natural.“ The Belfiato Quintet picked three – the most beautiful and most engrossing – of Rejcha’s 24 wind quintets, which they have recorded at the acoustically exceptionable Rudolfinum hall in Prague. It would seem that the virtuoso and passionate musicians have found in Rejcha a kindred spirit. And they play his music with a truly colossal vigour…

Antonín Rejcha (1770–1836) lived an adventurous and turbulent life. When he was 10, he ran away from his Prague home, and would live in turn in Bonn, Hamburg and Vienna, before finally settling in Paris. He presented his first symphony at the tender age of 17. Rejcha became a friend of Beethoven’s, who played the viola in the same orchestra, he made the acquaintance with Haydn, and his teachers included Salieri. A keen experimenter, he liked to write in quintuple time, was fascinated by Gypsy music with micro-intervals, playing with numbers and chords, polyrhythm, polytonality and counterpoint. Moreover, he was an accomplished theorist and a renowned teacher, also working as a professor at the Conservatoire de Paris. His students included Liszt, Berlioz, Franck and other distinguished composers. Antonín Rejcha was the first to write truly masterful wind quintets, making full use of the instruments’ timbres and technical potential. Notwithstanding its being challenging to perform, his music comes across as bright, airy and gracious.

The Belfiato Quintet is made up of players of renowned orchestras (Czech Philharmonic, National Theatre Orchestra, PKF – Prague Philharmonia, State Opera Orchestra, Prague Symphony Orchestra, Pardubice Chamber Philharmonic and Philharmonia Orchestra, London). They have garnered accolades at international competitions, including the ARD competition in Munich, Prague Spring and Concertino Praga. The Belfiato Quintet won the Antonín Rejcha Prize in Semmering. In 2011, the ensemble came third at the Henri Tomasi International Wind Competition in Marseille, where they also received the prize for the best performance of a Tomasi work.