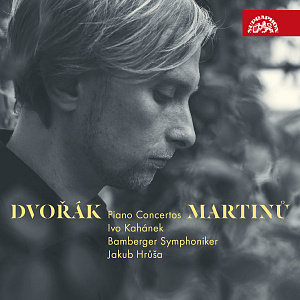 TO RELEASE ONE OF THIS YEAR’S MAJOR ALBUMS

At first glance, it is evident that an extraordinary constellation of artists is one the most significant attributes of the new recording of Dvořák’s and Martinů’s Piano Concertos. A Czech conductor and a Czech soloist, and a German orchestra, who have a Czech sound in their DNA. All three of them enjoy great renown in both the European and global contexts. Symbolic indeed is the selection of the album’s repertoire – the same world war that deprived the players of the German Philharmonic in Prague of their home and that in 1946 gave rise to the Bamberger Symphoniker in Germany made Bohuslav Martinů leave his country and Europe itself.

Bohuslav Martinů wrote his Piano Concerto No. 4, “Incantation", in New York in the twilight of his life, when it was evident that he would never return to his homeland. The soloist featured on the new album, Ivo Kahánek, expressed his high opinion and affection for the work: “I personally consider Incantation to be one of the finest works of Martinů’s and one of the best pieces of Czech music in general, as well as one of the most singular compositions for piano and orchestra of the second half of the 20th century. All the facets, from motoric rhythmicity, through passion and tragedy, to dreamy surrealism, form together a truly breath-taking whole.” The selection of the soloist for the recording was by no means random. Kahánek has played the Incantation at prominent concert halls all over the world (BBC Symphony Orchestra, Jiří Bělohlávek – BBC Proms; Berliner Philharmoniker, Sir Simon Rattle – Berlin, Prague, etc.).

The performance of the piece in Bamberg, captured on the present album, which will be launched within the Dvořák Prague festival on Monday 9 September 2019, has been lauded by the critics as revelatory. The studio recording of Antonín Dvořák’s Piano Concerto ranks among the most forcible returns to the composer’s original version of the work, forbearing the “effective and virtuoso improvements” carried out by its later arrangers. It showcases the tender and melodious music of Dvořák, who always strove to emphasise profound expression, giving it preference to instrumental impression. An exceptional encounter of outstanding musicians, performing an exceptional Czech – and global – repertoire. As Jakub Hrůša put it: “The concerto possesses immense power and beauty, representing an interesting task for the conductor, an equal dialogue, with the orchestra and the conductor always having something to offer.”

The recordings were made in 2017 and 2019, in collaboration with a top-notch Bayerischer Rundfunk (BR Klassik) team, at the Joseph-Keilberth-Saal, the Bamberger Symphoniker’s home venue, whose acoustics are among the best in Europe. The album has been produced by Supraphon, with support from the Bohuslav Martinů Foundation. It will be officially released on 27 September 2019.