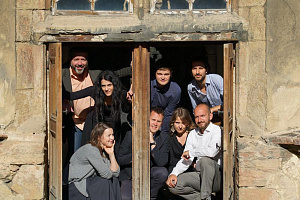 The internationally renowned chamber choir Cappella Mariana specialises in medieval and Renaissance polyphony and early Baroque vocal pieces. The ensemble, who last year celebrated a decade together, is made up of stellar early music singers, including the sopranos Hana Blažíková and Barbora Kabátková. Under the artistic guidance of Vojtěch Semerád, the choir has performed Renaissance polyphony to great acclaim at Europe’s most prestigious concert venues and festivals. On 30 August 2019, Supraphon will release Cappella Mariana’s fifth album, titled Praga Rosa Bohemiae.

The recording features works by composers who lived during the era of the art-loving Emperor and King Rudolf II, when Prague enjoyed great glory, as it became a busy cultural centre, attracting artists from all over Europe. Like in a melting pot, a variety of musical styles mingled together in the city: the Franco-Flemish polyphony, represented by the world’s most accomplished composers at the time, as well as the vigorous tradition of literary brotherhoods with the archaic polyphonic repertoire of the previous generations.

The focal point of Cappella Mariana’s new album is the recently rediscovered Prague Manuscript of Polyphonic Masses, with the fabulously survived Missa Presulem ephebeatum by Heinrich Isaac, one of the most significant masters of the Franco-Flemish polyphonic style. Petrus Wilhelmi de Grudencz’s Presulem ephebeatum, whose thematic material inspired Isaac, attests to his mass being connected with Bohemia and Prague. The album contains a number of other extraordinary pieces, including Josquin Des Prez’s famous Stabat Mater, with an added sixth voice, which has been uniquely preserved in this form in Bohemia. “Yes, it is so. Josquin Des Prez’s Stabat Mater has survived as part of a Czech source – the Rokycany music collection, with an added sixth voice, designated as ‘si placet’, at pleasure,” Vojtěch Semerád pointed out. When asked the question as to which of the works on Capella Mariana’s new album was the most difficult to cope with, he said: “Following the rediscoveries, the hardest nut to crack was to single out the different stylistic nuances in line with the development of Renaissance music in Prague from the late Middle Ages to the accession of the Baroque style. I would like to add that Johannes Tourout’s Virgo Maria was complicated owing to an obscure notation in a variety of sources, yet I dare say that our performance faithfully adheres to the composer’s sty­listic mode.”