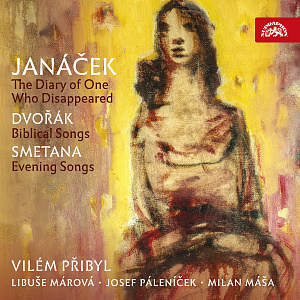 AS PERFORMED BY VILÉM PŘIBYL

On Friday 30 August 2019, Supraphon will release a reissue of three extraordinary Czech song cycles made in 1978 and 1988 by the unforgettable Czech tenor Vilém Přibyl. The album featuring Janáček's The Diary of One Who Disappeared, Dvořák's Biblical Songs and Smetana's Evening Songs will be available on CD as well as on digital formats.

Vilém Přibyl was mainly connected with Brno, where he lived and worked for three decades. Moreover, Přibyl performed as a guest at the National Theatre in Prague, and he also impressed audiences in Edinburgh, London (Royal Opera House), as well as in France, Italy and the USA.