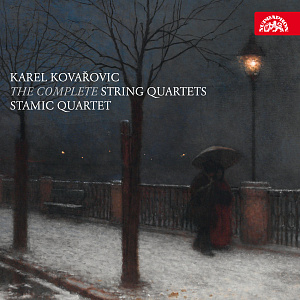 Karel Kovařovic (1862–1920) is primarily known for his work as the director of the opera company of the National Theatre in Prague, as well as a conductor, while his own music has been generally overlooked. Nevertheless, Kovařovic wrote several operas, ballet and incidental music, songs, choral and chamber pieces. The Stamic Quartet has made the very first recording of his string quartets, which are yet to be published. The most remarkable of them is String Quartet No. 2 in A minor, dedicated to Antonín Dvořák, which six years after its premiere in Prague (1888) was performed to great acclaim at the Musikverein in Vienna. Kovařovic did not finish his String Quartet No. 3, most likely owing to his being extremely busy as a conductor and his new responsibilities at the National Theatre. The new album made by the Stamic Quartet serves to prove that Kovařovic’s qu­artets richly deserve to be paid much greater attention to than has been the case over the past century.

We talked about the new recording with Josef Kekula, the violinist of the Stamic Quartet:

How did you arrive at the decision to make the album?
The idea of reviving Kovařovic’s string quartets was in line with our intention to rediscover forgotten and less frequently performed music by Czech composers. In the past, our ensemble recorded the complete quartets of Antonín Dvořák, Bedřich Smetana, Leoš Janáček, Antonín Hába, Bohuslav Martinů, Josef Bohuslav Foerster and Jan Klusák, so the new album is just a logical outcome of our endeavours. When it comes to the “discoveries”, they have so far mainly encompassed works by Czech classicist composers – in this respect, Kovařovic’s works are the exception. We found out that Karel Kovařovic wrote three string quartets, which have never been published, and they only exist as manuscripts. Thanks to the assistance and understanding of the staff at the Czech Museum of Music employees, we have succeeded in making the scores fit for use and have subsequently revised them.

What was the most difficult aspect of the recording process?
The most difficult aspect was revising the music material. Another problem we had to tackle was the tempos, as we had nothing to lean on in terms of the performance tradition. Tempo marks were either missing in some places, or were contradictory in the parts, as they were noted down by musicians when performing the pieces. We actually only made the decision about the definitive form when listening.

Will the Stamic Quartet perform Kovařovic’s string quartets at concerts?
We have already performed the quartets. We played all three of them at the EuroArt Prague festival. The second quartet, dedicated to Antonín Dvořák, was included in a concert held by the Czech Chamber Music Society. Of late, we have often performed the third quartet, which has a wonderful slow movement. Karel Kovařovic’s string quartets have become part of our repertoire, and now we have recorded them. The Stamic Quartet is really happy about it, and we hope that we will also convey our joy to the audience!

The new album will be released on CD and digital formats on 14th June 2019.