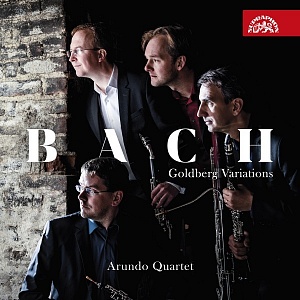 The legendary Goldberg Variations are among the most frequently recorded Johann Sebastian Bach works; besides numerous versions for piano and harpsichord, there are recordings of transcriptions for other instruments, including the banjo. Even though at first glance the arrangement for wind quartet appears distant from the composer’s original notion, when listening to it you may have the feeling that Bach himself might have had such an ensemble on his mind when writing the work. The reed instrument timbers wonderfully merge into joint harmony, while their shadings allow for tracing the leading of the individual parts within the polyphonic texture, which is most definitely an advantage as against the original keyboard version. The Aria and the 30 Variations afford sufficient scope for cantilena and foregrounding of the instruments’ gracious colours, as well as for showcasing their uttermost virtuosity. The present album features the Goldberg Variations and the Suite in C major, BWV 1066. The remarkable recording has been made by four extraordinary musicians, superb soloists and chamber players, who have adorned some of the most renowned orchestras, including the Berliner Philharmoniker and the Czech Philharmonic. The Arundo Quartet is made up of Jan Souček (oboe), Jan Mach (clarinet), Karel Dohnal (basset horn) and Václav Vonášek (bassoon).

We talked about the new album with the bassoonist Václav Vonášek:

Why did you choose these works in particular for your debut album?
I discovered the magic of the Goldberg Variations relatively late – unsurprisingly, when listening to a recording made by Glenn Gould (the more recent, more mature one). After having given up attempts to play at least fragments on the piano, I began to work out the individual parts on the bassoon. Afterwards, we got down to creating a “demo version” for a wind trio, a configuration in which we were regularly performing at the time. Our selection (13 Variations) always met with a positive response, yet we could not shake off the feeling that it should not remain that way. Then, while performing Mozart’s Gran Partita, I realised that the basset horn was the missing link and I could plunge into arranging the entire cycle. So the answer to your question is: we decided to record the arrangement following several successful concert performances, to which the audience responded with immense enthusiasm. We had no doubts that it was a great idea.

On your album, the intimate universe of the Goldberg Variations is followed by the festive Suite in C major, BWV 1066, the earliest and the “most French” of Bach’s four orchestral suites. Why did you choose the latter composition?
The piece has been referred to as “orchestral”, yet it is written in a very chamber-like manner, prevailingly for a mere four voices. We primarily embraced the Suite’s dance section, which is very much befitting for wind instruments. As a colleague of mine pointed out – in comparison with the fiddly job with the Goldberg Variations, the work on the Suite went really smoothly: “As though we were playing at a ball”.