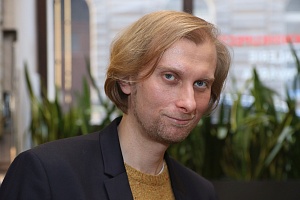 WITH THE PIANIST IVO KAHÁNEK

The very first complete recording of Viktor Kalabis’s piano works – just as the previous album featuring his three sonatas (SU4210–2, Supraphon, 2018) – came to fruition owing to the initiative and keen enthusiasm of the world-renowned harpsichordist Zuzana Růžičková, the composer’s wife and promoter of his music. A crucial role was played by the choice of the performer, a highly technically skilled pianist, possessing a deep insight into Kalabis’s style.

The new recording album maps more than half a century of the composer’s music, from his post-war Sonata No. 1 to brilliant miniatures dating from the very end of the millennium. Following the acclaimed album of Kalabis’s sym­phonies and concertos (SU4109–2 – Choc de Classica, Gramophone Editor's Choice) and the mentioned CD of sonatas, the present project opens yet another window into Kalabis’s fas­cinating musical universe.

On the occasion of releasing the very first complete recording of Viktor Kalabis’s piano works, we talked to Ivo Kahánek:

How long were the preparations for making a recording of such challenging music?
The preparations were long and continuous – it took three years to make the recording. In musical terms, Kalabis’s piano works are challenging owing to some of its facets being difficult to grasp, while in technical terms owing to the texture being not “piano-friendly”. His music comes across as relatively rational, yet at thorough scrutiny you find out that it directly expresses emotion – as a result, it is really challenging for the pianist to render. Accordingly, Kalabis’s pieces are very difficult in consequence of their being unpredictable and technically complex, as the scores contain many unconventional grips, skips and extreme tempo.

How much did Viktor Kalabis’s style change over half a century?
In a matter of fact, at the first glance there is no palpable stylistic transformation of Kalabis’s piano works. He actually changed the manner of composition, viewing of life and the world earlier, before he wrote his first pieces for solo piano. A case in point is the rejoicing, vigorous Strážnice Festival for a large orchestra (recently performed by the Czech Philharmonic), as well as, perhaps, the Piano Concerto. On the other hand, Kalabis’s piano sonatas and later works reveal far more scepticism and introspection. A certain development can be seen in the genre and form of his writing, his rather marked shifting from the sonata cycle to smaller, albeit similarly compact compositions, like the Accents, Three Polkas and Allegro impetuoso, for instance, which seem to be imbued with a higher degree of playfulness.