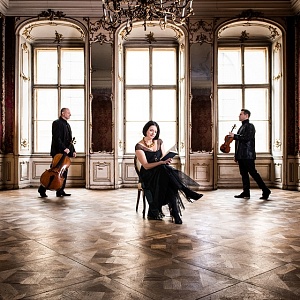 SMETANA TRIO ABOUT THEIR NEW ALBUM

The internationally acclaimed Smetana Trio made a new recording of three piano trios by Zemlinsky, Rachmaninov and Arensky. We asked the pianist Jitka Čechová and the cellist Jan Páleníček a couple of questions about the three compositions featured on the new album, about their new violinist as well as about their plans for the future.

The three compositions featured on your new album were written within the time range of a mere four years. Are they similar to one another?
Čechová: Not at all. Although written between 1892 and 1896, each of the trios is characterised by different colours and depicts a different world. Rachmaninov’s Trio élégiaque No. 1 in G minor, which he composed at the age of 19, is an entirely breezy piece, in spite of being fraught with sentiment and nostalgia. Arensky’s Piano Trio No. 1 in D minor, Op. 32, inspired by Tchaikovsky and Rimsky-Korsakov, emanates the Russian romantic spirit. And when it comes to Zemlinsky’s Piano Trio in D minor, Op. 3, I would say it is akin to Brahms’s music.
Páleníček: When selecting the repertoire for our new album, Supraphon and we agreed to pick “beautiful music”. Regardless of the time of their inception, we wanted to choose works that deserved our attention. And although Zemlinsky and Arensky have been overshadowed by more celebrated composers, like Brahms and Dvořák, their music is truly divine.

What are the trios like in terms of compositional style?
Čechová: The impact of the Russian post-Romanticism is evident. All the themes reflect ample emotional exertion, which affords us a fantastic plethora of expression in pitch, vibrato, playing with detail ad infinitum. What we find particularly exciting is that our hearts can form a monolithic emotional current.
Páleníček: I would highlight the word “heart” – when you realise that the works came into being at the turn of the century, the time when new musical trends were emerging – the three composers really presented that which they had in their hearts. That is something that delights the performers and audience alike. As regards the compositional style, the three pieces are truly inspired and refined. The instruments are wonderfully balanced in terms of the content and acoustics.

How have audiences respond to the works included on your album?
Páleníček: With great enthusiasm, and not only in the USA and Canada, which we toured a few weeks ago. It seems that the majority of the audience were hearing the works for the very first time, notwithstanding that we performed at prominent venues. The keen reception has clearly confirmed that they are cogent, communicative pieces, which fully deserve to be encompassed in the staple trio repertoire.

You worked on the album with a new violinist, Radim Kresta. What was your first co-operation at the studio like?
Čechová: I think that making a studio recording is a specific type of work. We pursue certain principles, always striving to make it come across as natural and spontaneous. Our aim is to convey energy and airiness, not to reveal that an album was produced at a studio. And we have succeeded with Radim Kresta in this respect.
Páleníček: Radim Kresta is an immensely meticulous musician, thoroughly exploring every work. Not utterly spontaneous, he knows precisely what he is doing with every single note being well-considered. His approach is highly beneficial for the recording process.

You have recently returned from the USA and Canada. What places did you visit during your tour?
Čechová: We visited California, Washington and Oregon in the US, and Vancouver and Kingston in Canada. Besides Dvořák’s and Smetana’s music, we performed the pieces featured on our new album.

What venues are you scheduled to appear at in the next few months?
Páleníček: We will pay two visits to England, within which we will return in July to Wigmore Hall, to which we really look forward. We will also give numerous concerts in the Czech Republic. We are scheduled to appear in Switzerland in May, Poland in August, and subsequently in Argentina, where we will perform at the celebrated Teatro Colon in Buenos Aires. We will visit Spain in September and Italy in October. Well, by no means are we going to be taking it easy…

Can you reveal the repertoire you would like to focus on?
Čechová: When it comes to future recording projects, it is somewhat tricky, as we have already recorded our core repertoire. We do have a few ideas, seeking in less chartered territories, yet for the time being I do not want to disclose the names of specific composers. We would also like to devote to those who besides classical music wrote film scores, like Korngold and Bernstein, for instance.
Páleníček: And we are facing a truly great challenge too. The informed audience have voiced their interest in us recording the complete Ludwig van Beethoven trios. We have occupied ourselves with Beethoven’s trios, which we love and consider to be the absolute Classical apex in this genre, for many years, hence we like the notion. Yet it is an ambitious task, one requiring enormous responsibility, as it is extremely difficult to record works that have been performed in so many ways. Nonetheless, we like great challenges and creative incentives.