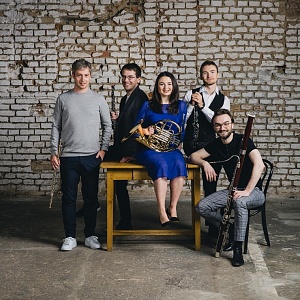 SHROUDED IN THE MYSTIQUE OF PAVEL HAAS’S MUSIC

In 2017, the Belfiato Quintet had their debut album released on Supraphon. Featuring three pivotal Czech works for wind quintet, Leoš Janáček’s sextet “Youth”, and Josef Bohuslav Foerster’s and Pavel Haas’s wind quintets, the CD was lauded by the critics (Harmonie Choice and MusicWeb International’s Re­cording of the Month). Subsequently, the ensemble made a video clip for the first movement of Haas’s quintet, titled On the Edge of the Forest and directed by Tomáš Hájek.

The Belfiato Quintet has now recorded a second video clip, a loose sequel to the previous one. The second movement of Pavel Haas’s quintet, Preghiera (Prayer), has been visually represented by the film director Tomáš Holub. Named Decisions That Make Tomorrow, its storyline is derived from that which Pavel Haas wrote in the score of his composition: A bird flew up to the sun, flew, flew, and did not reach its destination. “Pavel Haas’s note pertaining to the piece greatly inspired us, yet I don’t think it was absolutely crucial. We have striven to show another dimension of classical music, connected with the power and magic of nature. Nature that harbours mysteries and enigmatic beings. The subject, which is already palpable in the first video clip, filmed by Tomáš Hájek, has been further developed. Our aim was to hint at the tragic fate of Pavel Haas, who fell victim to the Holocaust. For a long time, we mulled over how to incorporate it in the video in a seemly and discreet manner, and ultimately arrived at the conclusion that the storyline itself would be the message,” Tomáš Holub said.

The clarinettist Jiří Javůrek pointed out: “We filmed the video clip in January in the snow-covered Krkonoše mountains, near Benecko, at the place where we have been regularly rehearsing, so we know it pretty well. The lead role was assigned to me, since the clarinet plays the major part in the work. It was quite challenging, as I had to spend a lot of time barefoot and unclad, with the worst thing being walking and running on snow. After a few steps, your feet are in pain, as though someone were piercing them with a sharp knife,” is how Javůrek described the recording process, adding: “The actual running in the forest was not so painful, I was more worried about the passing-by skiers’ funny looks. After all, you don’t often see someone running naked in the woods in January.”

The director Tomáš Holub added: “The most difficult moment during the recording was to tell the Belfiato Quartet members that one of them would have to strip off and run naked in the snowbound forest. I was really afraid that they would sweep my idea aside, but they approached it with courage, like true professionals. And I am really grateful to them.” The Belfiato Quintet’s video clip, titled Decisions That Make Tomorrow, has been created by a team made up of the cameramen Tomáš Hejzlar and Marek Čihař, the costume designer Lenka Hájek Kristianová, and the illustrator and animator Zdenka Převrátilová. “It is the fruit of our joint work, and I extend my thanks to everyone,” Tomáš Holub said.