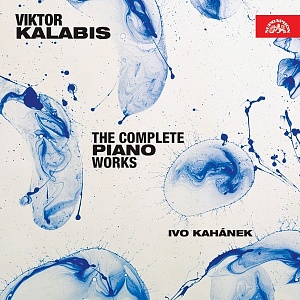 As a performer of exceptional emotional power and depth, Ivo Kahánek, who turns forty this year, has earned a reputation as one of the most imposing artists of his generation, and he is regarded by many as today’s best Czech pianist. Around the world, he is seen as a specialist in music by Czech composers ranging from the Baroque to the modern era, and he embraces their works with uncommon emotionality. For the last two years, he has been devoting himself intensively to the legacy of the composer Viktor Kalabis (1923–2006), including his activity in recording studios.

“For making the first complete recording of Viktor Kalabis’s piano music, the choice of performer was of fundamental importance – someone with supreme technical skill and with deep insight into the structure of the composer’s music was required, and Ivo Kahánek is just such a pianist,” said Supraphon’s chief executive producer Matouš Vlčinský. About making a world premiere recording of the music of Viktor Kalabis, Ivo Kahánek said: “Logically, the initial idea of devoting myself to Kalabis’s music came from Professor Zuzana Růžičková, who was the composer’s wife for many years and remained a great, enthusiastic promoter of his works until her death. Her enthusiasm was truly infectious, and it was chiefly because of her that I immersed myself so deeply into Kalabis’s music.”

Although Kalabis took inspiration from other masters of the twentieth century, he soon arrived at his own original, unmistakable musical language, which is already clearly discernible in his early opuses. The recordings survey more than half a century of Kalabis’s music, from the post-war First Sonata to miniature masterpieces written right at the turn of the millennium. After the award-winning albums of Kalabis’s sym­phonies and concertos (SU4109–2 – Choc de Classica, Gramophone Editor’s Choice) and of his sonatas, this recording sheds still more light on the fascinating musical world of Viktor Kalabis. As Ivo Kahánek observed, “Viktor Kalabis’s music is sometimes written in a surprising way, and in general it is made with less concern for the pianist and his hands. Kalabis belonged to that group of composers who did not allow the traditional rules of piano technique to limit their imagination, so the resultant difficulties are even extreme in places.”

This first complete recording of Viktor Kalabis’s piano music, which Supraphon is issuing as a world premiere on 29 March 2019 performed by Ivo Kahánek on 2 CDs and in digital formats, has been made thanks to a contribution from the Viktor Kalabis and Zuzana Růžičková Foundation.