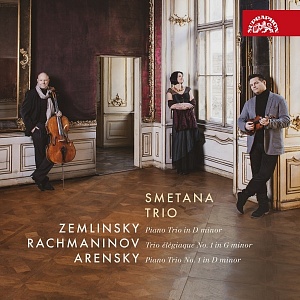 THREE GEMS OF CHAMBER MUSIC IN A NEW RECORDING

BY THE SMETANA TRIO

The three compositions that the Smetana Trio has chosen for its next recording were written within the span of just four years, but they represent three different musical worlds.

The Piano Trio by Anton Arensky recalls the atmosphere of bourgeois musical salons of the nineteenth century, where music was played for the pleasure of polite society. The composition by the twenty-five-year-old Alexander Zemlinsky represents the arrival of the search for new sounds and harmonies. The one-movement trio by the nineteen-year-old piano virtuoso and composer Sergei Rachmaninov exhibits that nobly elegiac quality that would become characteristic of the future works of the world-famous musician. Anton Arensky’s short life was marred by mental illness, while the lives of Zemlinsky and Rachmaninov were struck by external circumstances – they died within a year of each other while far from their homelands in the United States. With élan and commitment all its own, the internationally acclaimed Smetana Trio is presenting three noteworthy compositions of the late nineteenth century.

Supraphon will release the album on CD and digital formats on 29 March 2019.

Jitka, what enchanted you about these three unassuming chamber music gems of the late nineteenth century, leading you to choose them for the new Smetana Trio album?
All three trios conceal related emotional features. They are charged with emotions and tender themes, full of hope alternating with elegiac nostalgia, with the end of an amazing epoch within sight. Each of the composers speaks his own language, and yet we clearly sense that the works were created during the same era – actually within the span of just four years, from 1892 to ’96. This post-Romantic music is loaded with wonderful opportunities for free expression for all three instruments, and that was what attracted and inspired our trio from the moment we began studying these works. Arensky and Rachmaninov shared a common devotion to their musical idol – Pyotr Ilyich Tchaikovsky – and they let themselves be carried away on a wave of the most precious melodiousness and boundless expressiveness supported by colourful harmonies. The same thing applies to Zemlinsky with his predilection for polyphony. His music is often full of canons, and it builds up gradually to an almost orchestral kind of writing that evokes something of a Brahmsian sound. These are truly gems of chamber music, overshadowed somewhat by big Romantic canvasses, but they are deserving of our maximum attention. We hope our recording will contribute towards their full-fledged incorporation into the worldwide repertoire.

What interesting events are awaiting the Smetana Trio by the end of the season?
We just got back from another amazing, enormously successful tour of the USA and Canada, where we had the chance to present Rachmaninov and Arensky along with Czech music. Now we can gradually start getting ready for and looking forward to another tour next year, and some of the concert presenters from this year’s tour want to participate again. Towards the end of the season, there are other tasks awaiting our Smetana Trio, with a number of concerts around the Czech Republic and two trips to England, during which we will be returning to London’s famed Wigmore Hall. Then in the summer we’re going back to South America, in the midst of which there will be two concerts in the prestigious Teatro Colón in Buenos Aires, Argentina. But that almost rolls us over into next season, which start right off in September again in a southern vein, but this time the south of Europe, with concerts first in Spain and soon afterwards in Italy. Simply put, something’s going on all the time, and we constantly have something to look forward to. What more could we ask for?