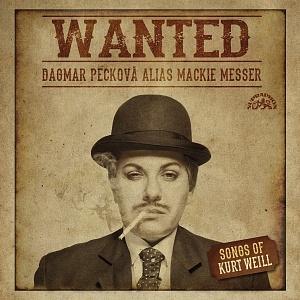 TO OPEN THE RENOWNED KURT WEILL FEST IN DESSAU

The prestigious Kurt Weill Fest first took place in 1993 in Dessau, the composer’s bir­thplace. This year, from 1 to 17 March, the town will host its 26th edition. The festival encompasses exhibitions, lectures and performances of opera, classical and contemporary music. It is organised by the Kurt-Weill-Gesellschaft, financed by the State of Saxony-Anhalt and the New York-based Kurt Weill Foundation for Music. This year’s edition of the internationally renowned festival will be opened by the Czech mezzo-soprano Dagmar Pecková’s show, titled Wanted, directed and designed by Michal and Šimon Caban. In addition to Pecková, the performance will feature the baritone Jiří Hájek, the pianist and conductor Jan Kučera, the Epoque Quartet & Orchestra and the Miroslav Hloucal Jazz Band.

“The performance of Wanted we gave in Prague in April 2017 was attended by the managers of the Kurt Weill Fest Dessau. They liked it so much that they immediately suggested that we appear in Germany. And this year our dream, one shared by all those who devote to Kurt Weill’s music, has come true! On 1 March, we will open the noted festival in Dessau. Our Wanted will be the very first Czech production to be included in the programme of the festival in its 26-year history,” Dagmar Pecková said.

In April 2017, Supraphon released Dagmar Pecková’s album Wanted, made up of Kurt Weill’s songs. The studio recording was made in collaboration with the same team of musicians and soloists who subsequently performed the repertoire on stage.