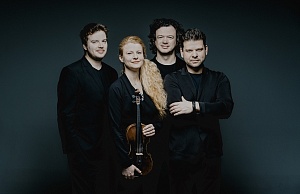 THE PAVEL HAAS QUARTET TO TOUR EUROPE AND NORTH AMERICA

AND TO MAKE A NEW ALBUM IN MAY

The globally renowned Pavel Haas Quartet have ahead of them a really busy second part of the concert season, during the course of which they will perform at prominent venues in the Czech Republic and further afield, and at several international festivals. The ensemble are also scheduled to make a new album.

The Pavel Haas Quarter will give their first concert this year at the Théâtre de la Ville in Paris, where they will debut. They will play together with a guest, the violist Pavel Nikl, who will also join them at the concerts in February at the Rudolfinum in Prague, in Polling and Munich, Germany, as well as in May at the Schubertiade festival in Hohenems, Austria. In March, the Pavel Haas Quartet will make a two-week tour of North America, where they will give seven concerts – in Napa Valley on the West Coast, in Calgary in Canada, in Dallas, New Orleans, Saratosa (Florida) and in Washington, DC. In April, the ensemble are scheduled to appear at renowned venues across Europe (including the De Doelen in Rotterdam, Wigmore Hall in London, the Philharmonie Essen and Liederhalle in Stuttgart) and also perform in the Czech Republic, where they will visit the Pardubice Music Spring festival and round off their current residence within the Czech Chamber Music Society with a concert at the Rudolfinum in Prague. Their programme in June includes recitals at international festivals (e.g. Concentus Moraviae in Brno, Czech Republic; Schubertiade in Schwarzenberg, Austria; East Neuk Festival in the UK and Hindsgavl Festival in Denmark).

In May, the Pavel Haas Quartet will be making a new recording. Their eighth, studio album will feature Dmitry Shostakovich’s String Quartets Nos. 2, 7 and 8. Peter Jarůšek said: “We have always wanted to record Shostakovich’s qu­artets, yet, for various reasons, have not got around to it. So we are happy that we will finally be able to make our dream come true. The new album will be in stark contrast to our previous, for the most part sun-drenched recordings. Music lovers can definitely look forward to it, as Shostakovich’s wor­ks are very close to our hearts.” The album will be released in September 2019 on Supraphon.