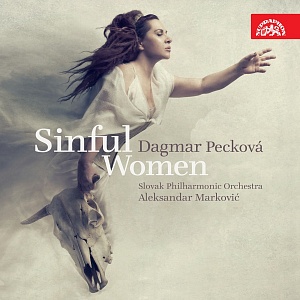 The provocative title of the new album by the feted mezzo-soprano Dagmar Pecková reflects a remarkable dramaturgic idea: that which connects the life of modern humans with the heroines of Antique mythology is the principle of sin - and forgiveness. This is perhaps why all the featured characters are smart and strong women, some of them even endowed with supernatural abilities. Women determined to apply the boldest means so as to gain that which they long for - or to take revenge. Women betrayed by a ruse or wounded by their own love. The very first aria featured, that of Massenet's Marie-Magdeleine, opens the scope for the message - that the only way out of sin is forgiveness. "When you look at mezzo-soprano characters, virtually all of them can be branded sinners. Perhaps it is owing to the darker voice colour..." says Dagmar Pecková. As rendered by her on the present album, each of the "sinful women" is profoundly treated in psychological and emotional terms. This profundity and inspiration is based on the soloist's own professional experience and is also the fruit of the collaboration with the accompanying Slovak Philharmonic Orchestra, under the uncompromising and masterful baton of Aleksandar Marković.

Love, sin and forgiveness. An insight into the mysterious female soul.

“Vocally Peckova's dark contralto-ish mezzo is in good shape throughout…Tone and supportive vocal colour seem to count more for her than pure text…Throughout the programme we hear superbly and cleanly executed run-throughs, but it is oftem Markovic's players who provide the real dramatic thrust (try the end of Elektra here).“
Gramophone, July 2015