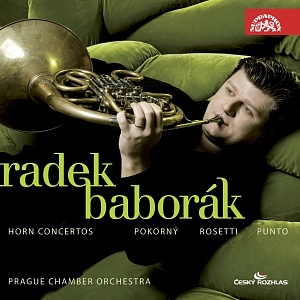 In the wake of the previous Supraphon CD "Serenade" (SU 3998-2), with its ground-breaking dramaturgy from 20th-century works, Radek Baborák, a phenomenal Czech musician and one of the world's foremost hornists, has returned to the Czech Classicist horn concerto. With his successful career, Baborák has linked up to the fates of the Czech horn players who back in the secondhalf of the 18th century gained fame in prominent chapels in the territory of today's Germany. The most renowned of them, Giovanni Punto, enthralled Mozart and Beethoven to such an extentthat they even dedicated compositions of theirs to him. Yet other Czech composers too had a penchant for composing for horn; František Xaver Pokorný for his daughter, the horn virtuoso Beata; Antonio Rosetti for Josef Nagel and František Zvěřina, outstanding Czech hornists in the Wallerstein court chapel.

Even though Radek Baborák hasn't Italianised his name, his international acclaim proves that the "hornist from Bohemia" phenomenon has lost none of its meaning since the 18th century.