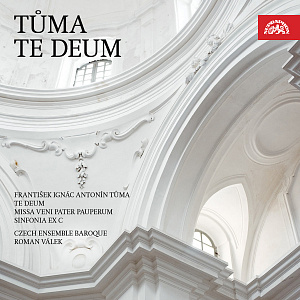 Czech Ensemble Baroque's first recording dedicated to František Ignác Antonín Tůma (Requiem, Miserere) confirmed his firm position among Europe's major late-Baroque composers. A pupil of the renowned Viennese master J. J. Fux, his music is characterised by immaculate refined counterpoint, yet he also embraced and brought to bear elements of the incipient Galant style. Dating from three different phases of his life, the three pieces featured on the present album map Tůma's artistic development. The grandiose Missa Veni Pater Pauperum, written in 1736 for the Schottenstift, a Benedictine abbey in Vienna, is from the time when he served Count Franz Ferdinand Kinsky, who had provided him with a thorough education. The festive 1745 Te Deum, scored for a similarly extensive ensemble, was composed for the Stift Wilhering, a Cistercian monastery in Upper Austria, which performed it on multiple occasions within the celebrations of the Feast of Corpus Christi. As regards the Sinfonia ex C, Tůma most likely conceived it towards the end of his days, when he lived in seclusion at the Premonstratensian monastery in Geras, Lower Austria. The three festive pieces, recorded for the very first time, attest to Tůma's being a composer richly deserving of special attention.