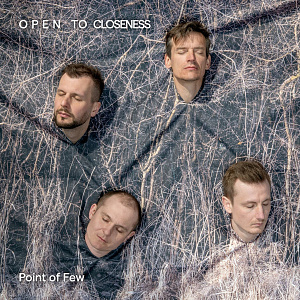 Catalogue Number: BR003
Published: 24th April 2022
Genre: Jazz
Format: 1 CD
"Big, honest, open-hearted energy."- Jason Lindner
Point of Few is a new Czech instrumental quartet organically combining electronics with contemporary jazz. Their music has an exceptionally fresh and original sound, it is colourful, adventurous and as changeable as the current times.
Formed in 2019, the band has used the ensuing period heavily influenced by pandemics to experiment and find their own path. In 2020, they produced the Live Sessions EP, only to come up with material for their full-length, surprisingly mature and polished debut, Open to Closeness, a year later. For it, she invited a guest of the highest calibre, New York keyboardist, composer, producer and sonic wizard Jason Lindner, who can be heard on David Bowie's iconic last album Blackstar, or in the bands of Donna McCaslin, Mark Guiliana and his own Now vs. Now ad. Jason puts his unique imprint on the three tracks, using synths to give the music a breathtaking breadth.
The recording has a top-notch sound, which was taken care of by Jiří "Topol" Novotný in the studio and in the mixing, and which was also consulted by Jason Lindner, while the mastering was done by Peter Beckmann at Technologyworks studio in London, who has recorded Laura Mvula and Kenny Wheeler, among others.
The band draws inspiration from an eclectic mix of contemporary jazz and popular music, naturally blending these worlds into one. The New York jazz scene and musicians like Justin Brown, James Francies, Jeremy Dutton, Mark Guiliana, Donny McCaslin and Robert Glasper are important influences, but occasionally echoes of early jazz idols like Pat Metheny and Bill Frisell peek out of their work. In the field of popular music, it's a varied mix ranging from David Bowie to Radiohead, the Red Hot Chilli Peppers to Anderson Paak, for example. Despite the fact that the songs often have novel forms or use odd meters, they still come across as songs with separate worlds, telling stories.