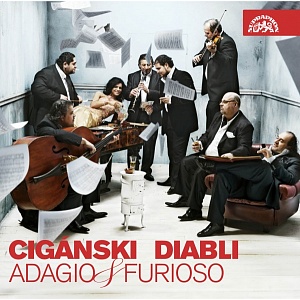 In Roma fairy tales, it is usually the devil who imbues Gypsy music with its inimitable vivacity. And when listening to Cigánski diabli, you cannot help but believe it. The popularity of this Gypsy orchestra has crossed the borders of their native Slovakia into Moravia, Bohemia and much further afield. Of late, they have been giving concerts abroad with in creasing frequency - Germany (including at the Berliner Philharmoniker Hall), England, France, Canada, etc. The ensemble, made up of eight professional, classically trained musicians, has already received three platinum discs.A traditional cimbalom band? Well, yes and no. They have, so to speak, many more strings to their bow: folk music (ranging from Slovak to Jewish), on occasions walking a tightrope between pop and jazz, at other times performing Haydn together with a "classical" pianist or a symphony orchestra. And since Brahms, Liszt and Dvořák were inspired by the "Gypsy style", why not turn things on their head and play their music the Gypsy way? With their characteristic virtuosity and vivacity, Cigánski diabli have entered the rarefied domain of classical music - yet in a manner entirely of their own and with arrangements not respecting the borders of genres. But what's the use of borders when the music is of such splendour?