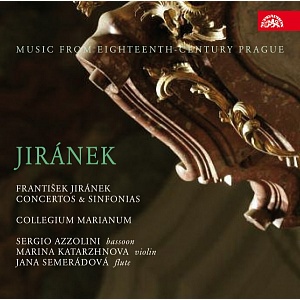 Ever newer chapters from the history of the bountiful musical life of Baroque Prague are still being discovered today. Until recently, František Jiránek, a composer and violinist of the Prague-based Count Morzin's chapel, had only been known to a select few. Now, for the first time, all lovers of old music are afforded the opportunity to listen to an exquisite collection of his virtuoso concertos. At first hearing, we can recognise inspiration by Vivaldi (combined with distinct elements of Czech musicality) - after all, Jiránek was sent by his employer to study in Venice, where most likely Antonio Vivaldi himself, at the time Morzin's "maestro di musica in Italia", was his teacher. Later on, Jiránek worked in Dresden, where his further creation was gradually formed by the Galant style and the ascending Classicism. The world premiere of Jiránek's virtuoso concertos has been undertaken by superlative soloists headed by the "wizard" bassoonist Sergio Azzolini. With full engagement, together with Collegium Marianum under the flautist Jana Semerádová, they have breathed new life into Jiránek, which this rediscovered composer sorichly deserves.

“After the thoroughly professional and exploratory earlier volumes of the ‚Music from 'Eighteenth-Century Prague‘ series, I expected this to be a worthwhile recording; but the music of the hitherto obscure Jiránek exceeded all expectations.“
International Record Review, May 2011