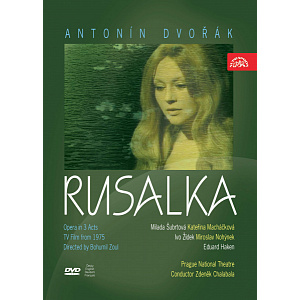 amazon.com
amazon.de
amazon.co.uk
amazon.fr
amazon.it
amazon.es
amazon.ca
Catalogue Number: SU 7008-9
Published: 24th January 2005
Genre: Opera
Format: 1 DVD
An opera in three acts based on a libretto by Jaroslav Kvapil Filmed for television broadcast in 1975 by Czech Television Prague Adapted for television by Ilja Bojanovský and Bohumil Zoul. Cinematography by Ilja Bojanovský Directed by Bohumil Zoul Featuring the soloists, orchestra and choir of the National Theater in Prague
Conducted by Zdeněk Chalabala Cast: The Watersprite (bass): Eduard Haken, Rusalka (soprano): Milada Šubrtová / Kateřina Macháčková, The Prince (tenor): Ivo Žídek/ Miroslav Nohýnek, The Witch (alto): Marie Ovčačíková / Slávka Budínová, et al. Since its 1901 premiere at the National Theater in Prague, Rusalka, Antonín Dvořák's most famous opera, has enjoyed the best attendance of any work performed in Czech opera theaters. Since the last decades of the 20th century it has been extraordinarily successful in prestigious opera venues all over the world as well. It is a work that has had a life of its own from the very start,undergoing a wide range of stage productions. Rusalka has not remained the exclusive property of the opera house, however, but has also been the subject of television and film productions. Supraphon is now offering viewers one of the television versions in modern DVD format. This exquisite 1975 production for Czechoslovak Television was the work of director Bohumil Zoul, cinematographer Ilja Bojanovský and theater actors, including Kateřina Macháčková, Miroslav Nohýnek, Slávka Budínová. Supraphon's famous 1961 recording formed the musical foundation of the project, featuring the legendary Rusalka of soprano Milada Šubrtová, and the equally legendary Watersprite of Eduard Haken, who acted as well as sang for this production. Another legendary Czech opera singer, tenor Ivo Žídek, sang the role of the Prince, and alto Marie Ovčačíková, an outstanding soloist of the National Theater, sang the Witch. The other roles were also filled by the top soloists of the National Theater opera company, and conductor Zdeněk Chalabala lent a touch of the extraordinary to the whole production. Rusalka is sung in Czech on this DVD, with subtitles available in English, French and German for foreign viewers. The story of a burning love's tragic end performed with outstanding musical quality in a dreamlike film atmosphere.