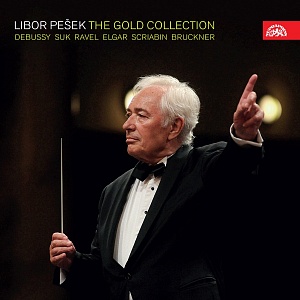 To mark Libor Pešek's eightieth birthday, Supraphon presents a representative selection of large orchestral recordings he made from 1981 to 1989. Compositions by Josef Suk, who has occupied a privileged position in Pešek's career, are featured alongside paramount Impressionist pieces - Debussy's La mer and Ravel's Suites from the ballet Daphnis et Chloé. Pešek's recording of Bruckner's Symphony No. 7 and Suk's lesser-known suite Under the Apple Tree are being released on CD for the very first time. The album also includes recordings of two concertos - Elgar's Cello Concerto, with Michaela Fukačová, and Scriabin's Piano Concerto, with Garrick Ohlsson. Within the illustrious career of Libor Pešek, a great and groundbreaking figure among Czech conductors, the period documented on this CD represents one of his peaks, the time of his most intensive collaboration with the Czech Philharmonic Orchestra, preceding his assuming the post of music director of the Royal Liverpool Philharmonic. These digitally remastered recordings bear witness to Pešek's remarkably nuanced work with the orchestral sound and sense for the great lines of Romantic orchestral scores.

A living portrait of a major Czech conductor.