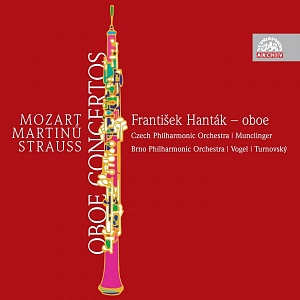 Spotify
Catalogue Number: SU 3955-2
Published: 8th August 2008
Genre: Orchestral
Format: 1 CD
The common denominator of the recordings of three virtuoso concertos is the name of the soloist. In 1932, while still a student, František Hanták was engaged by Václav Talich to take up thepost of first oboist of the Czech Philharmonic Orchestra. At the same time, Hanták was a member of Czech Nonet and, later on, also played with the Czech Philharmonic Wind Quintet and the pioneering ensemble Ars rediviva.
The concertos, however, are also related in the fact that all were created to the interpreter's order. Mozart composed his concerto in 1777 in Salzburg forGiuseppe Ferlendis, oboist of the Court Chapel. Only later on, under pressure of time, did he transpose it for flute, so as to meet another order. The initiator of Martinů's oboe concerto was Jiří Tancibudek, oboist of the Czech Philharmonic Orchestra, who emigrated in 1950 to Australia. He premiered the work in Sydney and also played it on many occasions in Europe, yet itwas František Hanták who premiered the concerto in Czechoslovakia in 1960, despite the disfavour against the composer prevailing at the authorities. Strauss's lucid chamber score of the oboe concerto originated in 1945, following a casual visit from the American soldier John de Lancie, in civilian life solo oboist of the Philadelphia Philharmonic Orchestra. The 81-year-old Strauss completed the exquisite work in the winter of the same year.