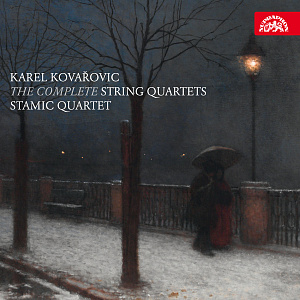 The Stamic Quartet's repertoire ranges from Baroque to 21st-century music (the highly acclaimed album of Sofia Gubaidulina's complete quartets, Supraphon 2012), yet the ensemble mainly focus on works dating from the end of the 19th and the beginning of the 20th centuries. Following the revelatory premiere recording of Josef Bohuslav Foerster's quartets (Supraphon, 2010), they have now come up with another striking project. Karel Kovařovic (1862-1920) is primarily known for his work as the director of the opera company of the National Theatre in Prague, as well as a conductor, while his own music has been generally overlooked. Nevertheless, Kovařovic wrote several operas, ballet and incidental music, songs, choral and chamber pieces. The Stamic Quartet has made the very first recording of his string quartets, which are yet to be published. The most remarkable of them is String Quartet No. 2 in A minor, dedicated to Antonín Dvořák, which six years after its premiere in Prague (1888) was performed at the Musikverein in Vienna. Kovařovic did not finish his String Quartet No. 3, most likely owing to his being extremely busy as a conductor and his new responsibilities at the National Theatre. The new album made by the Stamic Quartet serves to prove that Kovařovic's quartets deserve to be paid much greater attention to than has been the case over the past century.

Karel Kovařovic's string quartets - an extraordinary discovery more than a century after they were created.

“Given that Kovařovic was primarily known as an opera conductor, it’s perhaps no small wonder that there’s an almost vocal quality to the numerous memorable melodies in these immediately appealing works…”
Presto Classical, June 2019

“The Stamic Quartet presents these three works in lively performances, and thus successfully stands up for this almost forgotten composer.”
Pizzicato, August 2019