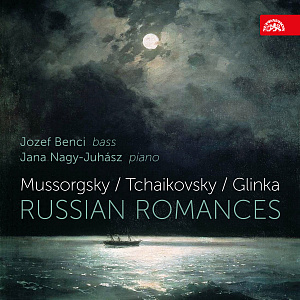 In the 19th century, composers sought inspiration in poetry, the simplicity and modesty of folk songs. Romances reflecting on loneliness, betrayed love and the misery of the abandoned occupied a special position in Russian lyric poetry in the first half of the 19th century, represented by A. S. Pushkin and other writers. Based on the Romantic poets' works, composers expressed their own intimate feelings, as well as muted defiance. One of the first to have written romances was Mikhail Glinka, the founder of the Russian nationalist music school. A whole generation of his successors, including P. I. Tchaikovsky, embraced the genre, creating numerous romances, mainly set to contemporary Russian poetry. Especially noteworthy among such works is M. P. Mussorgsky's cycle Songs and Dances of Death, made up of four pieces depicting the horror and bizarreness of death, referred to by the composer as "danse macabre".
Jozef Benci is a highly esteemed opera and oratorio singer, a soloist of the Slovak National Theatre in Bratislava, who has worked with the Czech Philharmonic and the BBC Symphony Orchestra, conducted by Jiří Bělohlávek, performed with Edita Gruberová and other renowned artists. Owing to his robust, yet highly sensitively led voice, a remarkable sense for songs' intimate nature, as well as an immaculate diction, he is a brilliant performer of Russian romances.

“Slovak artists, Jozef Benci, bass, and Jana Nagy-Juhász, piano, give their all in performances that will remain with the listener for some time afterwards. Benci’s honest, secure vocal production, drawing from deep within and with little or no recourse to vibrato, is complimented by his partner‘s sensitive participation. Always more than mere accompaniment, it reinforces and underscores the strong feeling and range of powerful emotions in the songs.”
Atlanta Audio Club, August 2019