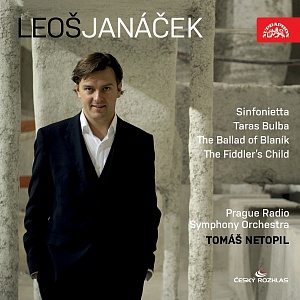 Janáček did not write a great quantity of symphonic works. Besides the Lachian Dances and an outline of the symphony Danube, they merely number the four compositions on this CD: three symphonic poems and the celebrated Sinfonietta. The symphonic poems, created within eight years between 1913 and 1920, reflect the turbulent political events and social tensions of the time, as well as Janáček's keen interest in Czech and Russian literature. The Ballad of Blaník is based on a poem by Jaroslav Vrchlický, while The Fiddler's Child was written to verses by Svatopluk Čech. When reading Gogol's novella Taras Bulba, Janáček was impressed by its hero, a Cossack chieftain, and referred to the author as the "prophet of the Slavs". Sinfonietta, indisputably the most significant Janáček orchestral piece, was premiered in June 1926 in Prague by Václav Talich with the Czech Philharmonic. Tomáš Netopil, the winner of the Sir Georg Solti International Conducting Competition and a regular guest of leading orchestras (Berliner Philharmoniker, London Philharmonic, etc.) and prestigious opera stages worldwide, has materialised his singular vision of Janáček's music in the recording made with the splendid Czech Radio Symphony Orchestra.

The first new Czech recording of Janáček's Sinfonietta and symphonic poems in many years.

“[in The Ballad of Blaník & the Fiddler's Child] Netopil shows that he is a subtle and meticulous Janáček interpreter, while the Prague players prove they can produce playing of real delicacy and tonal refinement.“
The Guardian, 23rd May 2013

“A superb programme…The substantially gifted Tomáš Netopil has the full measure of all four works…You hear everything and yet not a single note obtrudes. An absolute winner.“
Gramophone, 23rd August 2013