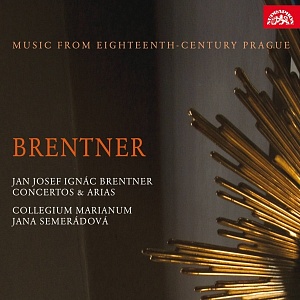 Spotify
Catalogue Number: SU 3970-2
Published: 31st July 2009
Genre: Vocal
Format: 1 CD
In the first decades of the 18th century, Prague was a hotbed of musical creativity. Unfortunately, there is a paucity of preserved music sources, among which instrumental music is represented to an even lesser extent. The selection of Jan Josef Ignác Brentner's concertos Hor? pomeridian?, which this recording presents in its complete form for the first time, is an absolute rarityin the given area and was the first-ever instrumental music by a domestic composer published in Prague. However, Brentner's first published opus was Harmonica duodecatomeria ecclesiastica (1716),a selection of sacred arias. With four printed collections, Brentner was undoubtedly the most published domestic composer of his time. Thanks to their being inspired by the Italian musical style, his works spread far beyond the borders - through Jesuit missionaries they even got to the territory of today's Bolivia (!), where several copies have been preserved up to the present day.

Brentner, celebrated in his time yet soon forgotten, today rediscovered, richly deserves to be one of the first composers presented within the new series entitled "Music From Eighteenth-Century Prague".