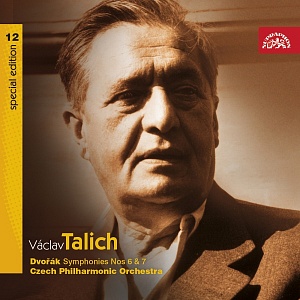 Deezer
Catalogue Number: SU 3832-2
Published: 23rd March 2007
Genre: Symphony
Format: 1 CD
The 12th title of our Talich Special Edition features recordings captured in the famous Abbey Road studios in November, 1938. They present Talich as one of the most renowned conductors (not only of Europe, but of the whole musical world) during the era between WWI and WWII. Talich was, for example, guest conductor of the Scottish Orchestra (conducting 26 of the 30 concerts in its 1926-27 season!), and one of the many glowing reviews from that period bears the all-revealing title "Talich-The Magician". Dvořák's 7th Symphony is also connected to the British Isles, as it was written on a commission from the London Philharmonic Society, which had made Dvořák an honorary member in 1884; Dvořák himself conducted the premiere in London on April 22, 1885.