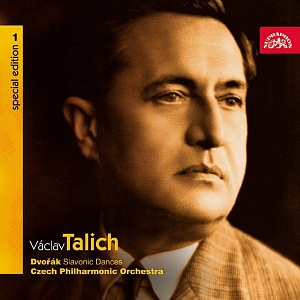 Deezer
Catalogue Number: SU 3821-2
Published: 27th June 2005
Genre: Orchestral
Format: 1 CD
- The exuberant start of a special edition dedicated to a conducting legend of the 20th century-Václav Talich.
- 16 Slavonic Dances in an extraordinary interpretation by Václav Talich and the Czech Philharmonic from the historic 1950 Supraphon recording.
- A version which established the interpretational tradition of the Slavonic Dances, admired in its time and still magical today.
- Talich's Dvořák not as "a musician who writes dance music, but as a poet of rhythm."
- The eight Slavonic Dances from 1878 (originally for piano, four hands) were one of Dvořák's first steps towards world renown. "A divine naturalness flows through this music. Not a trace of anything mechanical or forced," wrote one critic. Dvořák wrote an additional eight dances in 1886 when he was already a famous composer, and later orchestrated both sets.

Václav Talich - an ingenious conductor of the Czech Philharmonic