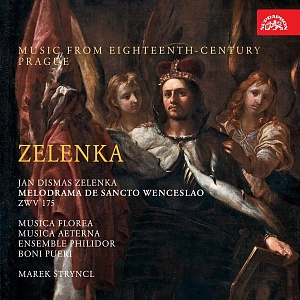 Sub olea pacis et palma virtutis conspicua orbi Regia Bohemiae Corona (Under the Olive Tree of Peace and the Palm Tree of Virtue the Crown of Bohemia Splendidly Shines Before the Whole World), 1723
Bonus: Facsimile of the original printed libretto from 1723 (in PDF format)

The coronation of Charles VI as Czech king in Prague was the event of 1723. Besides the Imperial Kapellmeister J. J. Fux's monumental opera Costanza e Fortezza, the greatest attention was paid to the melodrama Sub olea pacis, created by Fux's pupil Jan Dismas Zelenka, who at the time had been double-bassist in the Dresden court orchestra for more than a decade. In a succession of allegories, the composer guides us through the history of the Czech lands and evidences the genealogically founded title of the Habsburg royal couple to the crown of Bohemia, as well as their reign's benefit for the Czech people. Owing to its quality, the music clearly eclipses this encomiastic work's other components. Zelenka ingeniously works with instrumentation and frequently makes effective use of obbligato solo instruments (including the chalumeau). Over 150 performers appeared in the play, among them the thirteen-year-old František Benda. The performance at the Jesuit Klementinum met with a tremendous response among the noble audience and the royal couple alike, while the Jesuits sold over 4,000 (!) printed librettos. The work's most recent and similarly spectacular staging was at Prague Castle in 2000, performed by leading Czech and other European ensembles. This critically acclaimed recording was made on that very occasion.

”From instrumental obbligatos to antiphonal choruses it’s all so fresh and exuberant.”
The Times, 22nd September 2012