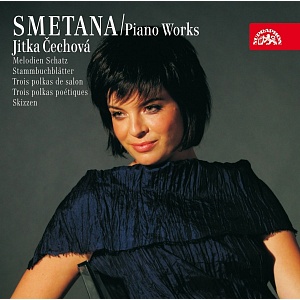 The dramaturgy of the fourth CD comprising Bedřich Smetana's piano works also reflects the pedagogic activity that fully occupied him in the late 1840s and early 1850s. It gave rise to a host of charming compositions and cycles, rather small in proportion yet rich as regards the scale of moods, impressions, compositional techniques and expressive possibilities the composer gave rein to on these modest areas. A significant group of compositions is formed by the generally popular Album Leaves, which at the time Smetana succeeded in publishing under different titles (Stammbuchblätter, Charakterstücke or Skizzen, dedicated to Clara Schumann). The other group is formed by Polkas which, after the fashion of Chopin's mazurkas, begin stylising and transforming into independent concertante formations of idealiseddance (Trois polkas de salon, Trois polkas poétiques).

In the form of an easy-on-the-ear collage, the energetic young pianist and member of the renowned Smetana Trio Jitka Čechová offers anotherchapter of Smetana's piano works in a gamut of colours and moods.