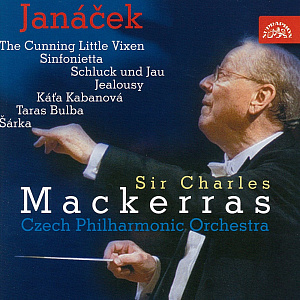 Spotify
Catalogue Number: SU 3739-2
Published: 12th January 2004
Genre: Orchestral
Format: 2 CD
Sir Charles Mackerras is known and respected worldwide as a leading connoisseur, champion and editor of Janáček's compositional output. He is now documenting his lifelong profound artistic and scholarly attachment to Janáček's music by a new complete set of recordings of Janáček's orchestral output. On a 2CD set the Czech Philharmonic does its best to fulfill Sir Charles's concept and creative intentions. The list of works featured here was supplemented by overtures to the operas, Káťa Kabanová (plus short interludes), and Šárka. Sir Charles Mackerras has had a particularly close, thoroughly personal affinity for these last-mentioned works: he actually discovered the Káťa Kabanová interludes while studying Janáček's manuscripts, whereupon he prepared a critical edition of the opera for publication by the Universal Edition of Vienna, in 1992/3. Similarly, he undertook editorial supervision over the processing of the score of Šárka. He then produced the opera's recent recording which obtained nominations in two categories for Grammy awards in 2001. Mackerras's Janáček occupies a pride of place in the Supraphon catalogue. Here is a complete set not to be missed by any aficionado of music by the Moravian genius composer.