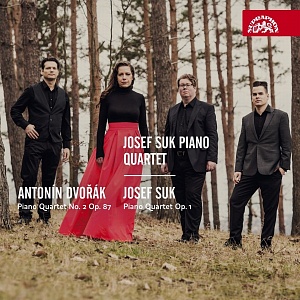 Works by Antonín Dvořák and Josef Suk - a teacher and his devoted pupil, the father-in-law and his son-in-law - have customarily been performed together at concerts and featured next to each other on recordings. What is more, the two piano concertos on this CD were created within the range of a mere two years. Yet that is all they have in common. Dvořák's Opus 87 reveals the personal and creative maturity of the 48-year-old composer, who at the time was in the prime of his life. Soon after completing his quartet, the maestro assumed the post of professor of composition at the Prague Conservatory. This decision would prove to be fateful - yet not so much for himself as it would be for the 17-year-old Suk, who was one of the most gifted students of Dvořák's selected class. A child prodigy, Suk had enrolled at the conservatory at the age of 16, and a few years later he would be travelling around the world as a member of the famed Czech Quartet. He gave his Piano Quartet, which he wrote under Dvořák's guidance, the symbolical opus number 1. The piece reflects his contemporary auto-stylisation as a passionate, flaring youth, yet its melodic forcibility and tenderness match that of Dvořák's work. The Josef Suk Piano Quartet (formerly the Ensemble Taras) has manifested its extraordinary qualities at international competitions (victory at the Concorso Salieri-Zinetti in Verona, the ACM Premio Trio di Trieste), as well as on concert stages all over the world. The recording makes it evident that the young musicians have Dvořák and Suk in their blood.

The mature Antonín Dvořák vs. the teenage Josef Suk - a duel with two victors.

“There are obvious links in the sturdy, earthy sweep of the themes and the intense dialogue between the instruments, and both have slow movements of big-hearted beauty. The Josef Suk Piano Quartet is named after the violinist (1929–2011) who was grandson of the composer Suk (and so great-grandson of Dvořák); they play with huge sound, loving detail and the kind of conviction and authority that comes from personal connection.”
The Guardian, 20th July 2017

“All four musicians are steeped in the Czech tradition, which in terms of the string players means warmth and an unfettered ease that is very engaging. Climaxes are full-throated but never overstated – just listen to the way the first movement of Dvořák’s Second Piano Quartet ebbs and flows, one moment surging forwards, the next brought down to the quietest of dynamics”
Gramophone, Awards Issue 2017

“These are tremendous performances of tremendous music… This new performance is even finer in terms of technical address and unanimity of ensemble. The individual and collective playing of the Josef Suk Piano Quartet is nothing short of staggering in its attack, accuracy, clarity and cohesion.”
MusicWeb International, October 2017

“The ensemble generates a sure sense of tonal warmth at all times modified by the dictates of the music. They know when to press the rhythms in Dvořák’s Op.87 Pi­ano Quartet, as well as they know how to inflect the native dance rhythms embedded into the music … With an attractive multi-language booklet – attractive in layout, colour design and information – and performances this good, I hope Supraphon keeps on with an exciting programme of recording for this excellent ensemble.”
MusicWeb International, November 2017

“Notwithstanding its aggressive unison opening, Dvořák's Piano Quartet No. 2 in E flat major has a very warm heart. Completed just before the Eighth Symphony, the Quartet shares that work's surprising mood swings, and its scherzo has a similar beguiling grace. The performers certainly have the measure of the work and give a considered reading that respects the detail of the score without losing any sense of spontaneity. There are times when their tempos seem a little wayward, notably at the end of the first movement, but these interpretative nuances never get in the way of the expressive intentions of the piece, and the playing throughout is unfailingly beautiful.”
BBC Music Magazine, January 2018