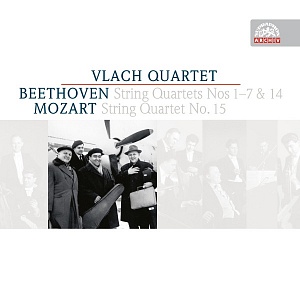 Deezer
Google Play
Catalogue Number: SU 4221-2
Published: 19th May 2017
Genre: Chamber Music
Format: 4 CD
This album has received following awards:
After having paid tribute to the legacy of the Czech Chamber Orchestra (SU 4203-2), Supraphon has now commemorated another ensemble connected with the violinist and conductor Josef Vlach, a gifted pupil of Josef Talich. Established in 1950, since 1954 the Vlach Quartet performed in the line-up in which it had triumphed in the competition in Liege (1955) and in which it conquered stages worldwide and made all the recordings featured on this album. Two exciting quartets, the Smetana and the Vlach, were active in Prague, ensembles whose difference represented an inspiring polarity of approaches to music interpretation. Ivan Medek thus described the personality of Josef Vlach, who with kindness and authority alike formed the quartet's soul: "Similarly to Talich, Vlach was not a scholarly artist. Yet he possessed a remarkable ability, an acute sense for that which is really strong and communicative in music. His intellect seemed to be constantly fed from an immense source of profound emotional inspiration." The Vlach Quartet recorded Beethoven's quartets within 10 years (1960-70). Given the year in which it was recorded, 1956, the "bonus" Mozart quartet in D minor is one of the ensemble's oldest recordings made soon after their victory in Liege. The presented Beethoven tracks are merely part of the Vlach Quartet's remarkable legacy, which encompasses quartet works by Czech composers (Dvořák, Suk, Janáček, etc.), as well as by Brahms, Tchaikovsky, Debussy and Ravel. And after you have listened to the fourth disc of this compilation, there will be more to look forward to.

Timeless Beethoven pieces, as performed by the legendary Vlach Quartet.

“The Vlach’s virtues in the Op.18 quartets are ones of mellifluous warmth in the best traditions of Czech string playing. Vibrato is finely calibrated between the two violinists, the primarius and guiding spirit of the group, Josef Vlach, part of a dynasty of great players … ensuring that he and Snítil are in accord.”
MusicWeb International, September 2017